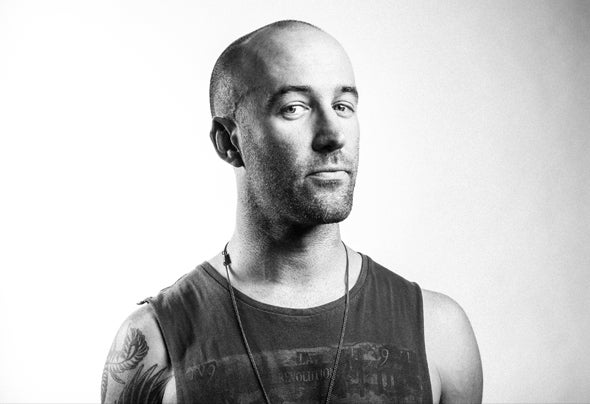 In 2013, it's all about the live show. A double Beatport #1 act and remixer, the boss of two labels, recent Aussie export to LA, a successful dance-pop songwriter on the side ... He's achieved a lot already but today, Bass Kleph is focused on taking live/DJ crossover to a new level. His free-flowing sets open with live jamming on the Native Instruments Maschine sampler, segueing expertly into the kind of DJing you get from an act who's had 12 years behind the decks - and then swap freely from live performance to DJing and back again. If you can't make it to a show, check out the Bass Kleph YouTube, which has seen tens of thousands of views of BK's live covers of big tracks like Nari and Milani's Atom (Size Recs) and Quintino & Sandro Silva's "Epic" (Musical Freedom), as well as his own releases like Flashing Lights and Make Me Forget.But the gift of pushing the boundaries of DJ performance? It didn't come from nowhere. To understand Stu Tyson, as he's known offstage, you've got to know about the graft. Most kids are still at school at age 15, but back then BK was touring Australia and New Zealand as the drummer of a hugely successful three-piece rock act, Loki. Playing live in grubby rock venues, he says, gave him his earliest understandings that there's a dynamic to making crowds dance. A catchy rhythm won't catch without the hypnotism of an irresistable hook - but then even the most nagging hook won't shuffle the feet until it's bent out of shape by the thunder of a serious rhythm section.Knowing this, the rock world was never going to hold on to him. As BK says, "I remember when Loki got its first album back from mastering. I'd been listening to Squarepusher and The Prodigy. Everyone else was stoked with the way the album sounded - but I thought 'why are the drums so quiet? Why is it all about the guitar?'"And why, he thought, couldn't Loki do more with that cool little bit of equipment he'd found in the back of the studio - a drum machine?Loki imploded eventually, the inevitable result of the music industry trying to screw all it could out of the band's three teenage members. BK left, determined that he wouldn't taken in by the empty promises of the industry again - but also that next time round he wanted to do it differently. A more electronic sound, focused on his new obsession, DJing.That was 12 years ago. Bass Kleph been DJing continually since - and the DJ booth is still one of his favourite places to be. Sure, his earliest gigs took advantage of his live-band experience in bringing a crowd to its peak - but it's the hundreds and hundreds of gigs since, from tiny clubs to huge festival stages, that taught him the craft of DJing and playing live, developing his own style that now can push the most beard-stroking underground crowd into a hand-waving frenzy, or lock a mainstream crowd into a dark, heads-down and wordless groove.And of course, there's no-one like BK for proving the cliche that the best DJs get the girls on the dancefloor. His recent single, Make Me Forget - featuring his first-ever vocal performance - had that knack of simple, direct, lighters-in- the-air pop songwriting, inspired by the heartbreak of the end of a relationship - the reason why you see the sisters singing along at every single gig. And beyond that, BK's been releasing and collaborating with international talent like Wolfgang Gartner, Morgan Page, Andy Caldwell, Mowgli, and his own labels Vacation and Exit Row have been a big part of the LA/Australian crossover, with acts like Tommy Trash, Hook n Sling, fRew and more. Bass Kleph may now have be firmly settled in LA's neon-lit club scene, but he's kept that irreverent, humble and self-depreciating Aussie approach: in life, his labels and his DJ and live sets - and, since Dec 2012, with Klephtomania, his new iTunes podcast series.Not bad for a man whose teenage self "just wanted to get on stage and bang some drums". As Bass Kleph says, "I love it. I love the journey, because there's always something new coming in music, in DJing, with songwriting. If I won ten millions dollars in the lotto tomorrow, I'd still keep playing live and DJing and writing music - what else is this much fun?"