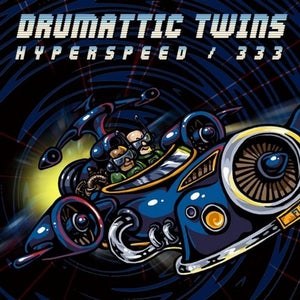 First up, Hyperspeed comes out of the blocks rocking. Pumping bass and concrete beats are the order of the day, laying the classic funk foundation for a delicious slice of old skool Electro sampling. Originally taken from aEUR~The Return Of Captain RockaEUR(TM), aEUR~HyperspeedaEUR(TM)s vocal sample has been smashing up dance floors in one guise or another over the past 20 years, for the likes of Captain Rock, Ultramagnetic MCs and the Prodigy. The Drumattic Twins add their own inimitable flavours to the mix, with some punishing bass and fizzing acidic leads, that will make this an automatic front of the box selection.

Flip-side '333's stabbing, squelchy bass and techy drums start the groove rolling, as Nick and Lanx keep the top lines switching, building up the track into a proper floor workout. The rising bass melodies and bleeping riffs add a sense of urgency, as the Drumattic Twins once again become the envy of digital alchemist everywhere, striking dance-floor gold.