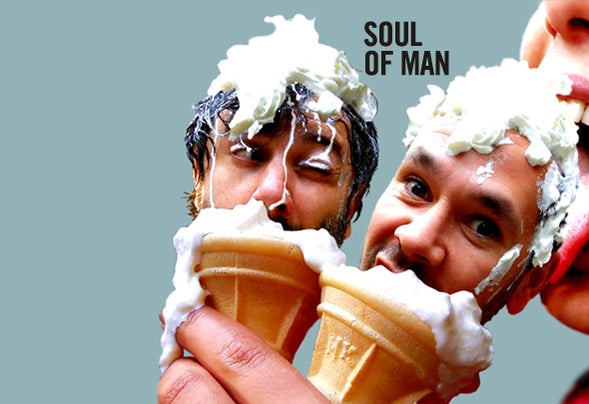 Having set up Finger Lickin’ Records in the late nineties it wasn’t long until they had a string of breakbeat classics under their belt; ‘Love & Hate’, ‘Between the Eyes’ and ‘Gonna Keep On’, became a staple in every DJ’s box with a unique sound that attracted other like minded producers to join forces with the Finger Lickers. The Plump DJs, Krafty Kuts, A-Skillz, Lee Coombs and The Drumattic Twins soon became part of the collective as their sound helped shape a whole generation of music makers. It’s a little known secret that without Justin and Jem a whole chapter in the history of dance music would never have existed. Just as at home behind the decks, Justin and Jem have toured the world DJing and their profile in Australia is legendary having performed ten times in six years! Throughout the summer season they will often be found face down in the fields of Glastonbury, The Big Chill or The Glade, as well as finding time for annual appearances in Ibiza. Jem, also a graphic designer, is responsible for the distinctive artwork on all the Finger Lickin’ record sleeves. His musical passion has its roots deep in funk and he is a classically trained percussionist, while Justin has always been a DJ. Best known for his party-fuelled rocking DJ sets, Justin’s experience spans from the times of him grafting as a mobile jock back in the eighties, through to the hazy days of the acid house parties of the nineties. Soul of Man clearly wear their musical influences on their sleeves; from funk to early hardcore, with lashings of house, all rolled together in their driving percussive force that makes the backbone to their distinctive sound. As remixers Soul of Man have attracted attention from a multitude of producers including Jacknife Lee, Doug Lazy, James Taylor Quartet, Fluke, Dub Pistols and Dreadzone all who wanted a taste of their special blend of breakbeat spice. It’s no surprise that Soul of Man’s productions have rarely left DJ’s boxes: 2001’s ‘Dirty Waltzer’, the dubwise-inspired ‘Killa Brew’, ‘The Drum’; ‘MyLowDownDirty’ or even their most recent single ‘SukDat’ have all become monster club smashes. However it actually all began for the boys back in 1998 with ‘Breakthru’ a mix compilation of post-Bigbeat, funk fuelled party tunes. It was this album that gave birth to the whole new sound. Since then they have been responsible for mixing all four volumes of the legendary ‘Finger Lickin’ Thang’ series, React’s ‘21st Century Breaks’ and the ‘Y4K’ mix for Distinc’tive. This June Soul of Man release ‘Re-Licked’ - a celebration of ten years of music making. On this stunning double CD the early, groundbreaking classics rub shoulders with twelve spanking new remixes courtesy of the hottest producers in today’s scene. A-Skillz, Merka, TroubleSoup!!, Deepcut, Nick Thayer, Kraak & Smaak and others have created outstanding and diverse reinterpretations of their fave Soul of Man tracks. Soul Of Man…innovators, influencers and breakbeat instigators.