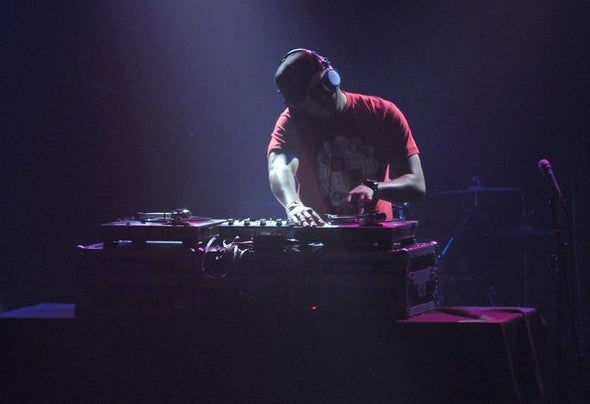 DJ Love began his dj career inspired by such seminal artists as Run-DMC, Jazzy Jeff, DJ Eddie F, Coldcut, Bomb the Bass, Simon Harris, Kraftwerk, Soulsonic Force, Egyptian Lover, Art of Noise, Paul Hardcastle and a host of other electronic and hip-hop pioneers. Electronic music fascinated him as a means of expressing raw emotion through beats, breaks and baselines and the diversity of other enthusiasts.Having been trained as a classical pianist and violinist, then augmenting his skills by learning the guitar and drums in high school, Love ́s musical training gave him strengths as an electronic composer from the start. Developing a small record collection his first few years of college, he was inspired by the fact that most of the music he felt was truly influential was only available on vinyl.A live performance of "Rockit"by the legendary Herbie Hancock and Grandmaster DST changed his perspective when he witnessed someone scratching over a track live. Another style of scratching that would catch the interest of DJ Love that of DJ Eddie F of Heavy D & The Boyz. Experimenting with his small collection, he taught himself to beat mix almost by accident.Attempting a remix of "What ́s On Your Mind" by Information Society led to beatmixing a record and a drum machine together, and his DJ career was born. Confined to the small town of Lawton, Oklahoma, Love would often drive two hours or more to find the music and crowds that inspired him. He recreated scratches from his favorite hip-hop records by trial and error until he had mastered them, then began playing out at local clubs in 1988. In 1992, he threw the first-ever, documented renegade "rave" in the OKC area, employing the old-school techniques of maps, an abandoned warehouse and a generator.This was all while he began a four-year residency at Rome, where he was given his DJ moniker of "Love". The income and gigs allowed him to acquire his own set of turntables, a mixer, and his first real music studio in 1994...six years after he had already started his DJ career. His love of real hip-hop and artists like DJ Premier and Pete Rock, among others, helped him focus on grooves and beats as the sound that would define his label, Stellar Music, founded in 1996.  By 1994, Love had developed a foothold in the Dallas music scene, and in 1997 moved there permanently. With a residency at club mainstay the Lizard Lounge in 1998, he achieved a following of those dedicated to old and new beats that followed him to such respected local hot spots as 2826, T he Red Jacket, T he Wall, Club DNA, Starck, Euphoria, Area 51, Club One, Wax, Spike, Ten, Z ubar and many others. Love has gained a following across the globe in countries like Canada, England, Spain, Australia, and more.His tracks have appeared in movies, on TV, and compilations from the likes of Fabric London, Y4K, Richard "Humpty" Vission, and many more.In 2000, DJ Love connected with the legendary Ali B(UK) of KISS FM fame and joined his label Air Recordings. Love released his first single on Air in 2005 and then released his first full-length album "Waiting for a Revolution" in 2012. Singles featured hip-hop legends such as Special Ed, Geechie Suede from Camp Lo, and several other talented new artists.Today, DJ Love is still spinning and remixing and producing music on his label Stellar Music; a full-on breakbeat, funk, and hip-hop label dedicated to bringing quality music to dance floors worldwide.