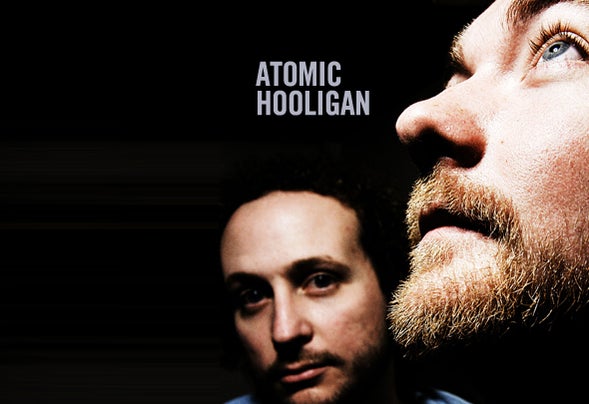 Matt Welch and Terry Ryan are Atomic Hooligan, a standard setting, boundary pushing DJ and producer duo who regularly hit the music world firmly between the eyes with 12” after 12”. Culminating to their recent high point, their debut album - YOU ARE HERE. YOU ARE HERE was released in April 2005 and won this year's International Breakspoll Award for Best Album and was listed as one of DJ Mag's Top 10 Best Albums of the year (alongside such luminaries as The Chemical Brothers, LCD Soundsystem, Soulwax and Royksopp). It exemplifies everything that is fresh about Atomic Hooligan and the figurative musical high rise block that they inhabit. Their ten piece live show has toured and rocked Fabric Live, Cargo, The Ocean Rooms and dates at all the major festivals including Glastonbury and The Glade. Then the Japan tour, after entering the National album chart at 11 the band whirl winded a ten day tour to a rapturous reception, and has now pushed sales of the album up passed the twenty five thousand mark in Japan alone, and rising. Its not just the album that's shooting Atomic Hooligan stratospheric this year! They are fast gaining the reputation of remix Royalty and following on from the huge success of their remixes of 'Cowgirl' and 'Born Slippy' for Underworld (“Born Slippy reaching no.1 in the Australian Dance chart). They reworked 'Obsessional Rhythm' by Lee Coombes and Andy Gardener (Plump Djs) which sent the Hooligans straight in at number 1 in the Breaks 'n Beats chart and then number 5 in the best breaks tune of the year. They have featured as front cover models for DJ Mag, and had interviews and mixes on XFM and BBC Radio 1. Atomic Hooligan support is strong on the airwaves with Eddy Temple Morris saying that the YOU ARE HERE album launch at Cargo was his XFM session of the year and calling it “a strong contender for album of the year”. DJ-wise Atomic Hooligan goes from strength to strength, starting 2005 at the Fuzzy Festival in Sydney Australia and ending it on New Year's eve at world famous super club Fabric London bringing in 2006. Between the busy live show schedule they are managing to fit in DJ dates in Canada with return trips to Japan and a China Tour in mid 2006, as well as dates in Germany, Switzerland, Spain, France and Russia. No wonder they were voted in the Top 5 breaks DJ's in the world.