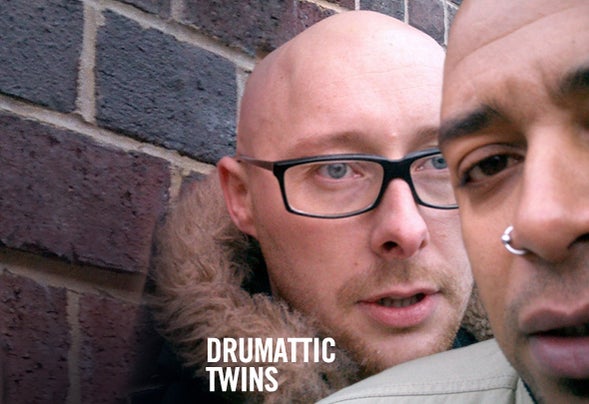 Nick Slater and Lanx's (aka Kevin Lancaster) stage name was the consequence of having amplified attacks of drum-machine seizures in their loft. Even the strongest prescriptions could not calm the frenzy of 12 years of multi-faceted producing and DJing that would ensue before they landed at Finger Lickin'. The Drumattic Twins' biography constructs their musical biology. As children of the dance revolution would remember, many moons ago, Nick and Lanx were known as the chart topping Shades of Rhythm. Two of the three, the reprehensible Nick and Lanx along with vocalist Rayan Gee, were then responsible for tunes like 'Sweet Sensation', 'Homicide', 'Ecstasy' and 'Sound of Eden' - tracks so seminal, they're likely to induce misty-eyed rumblings about “the good old days”. More salt water may well in thy eyes if footage of Nick and Lanx's appearance on Top Of The Pops is ever - hesitantly- unearthed. But some ten years later from their big bang, Nick and Lanx put the snapshots of the rave days into an album and re-invented themselves as the Drumattic Twins. Having discovered the downside of being tied down to the majors, they set up their own label in the late 90s and released a handful of Drumattic tracks and started working with Lee Coombs. Their mutual passion for electro soon led to setting their imprint with their label Freakazoid, which has huge underground support worldwide. Together with Coombs, the Drumattics went on to remix Arthur Baker's early house classic Criminal Element Orchestra's 'Put The Needle On The Record', as well as Dreadzone, Deejay Punk Roc, Mike Monday and old rave classic 'Psychotropic' by Hypnosis. Through their long-time friendship with Sir Coombs, Nick and Lanx met the loco lads at Finger Lickin' where the Twins parked their spaceship. Nick and Lanx already carried with them the wealth of the pre-emptive jewels that would ensure their success - solid sparkles of funk, house, hip hop, and of course, breakbeat - before the twosome joined the Finger Lickin' ranks. So, it was no surprise that their debut album entitled “Drumattical” on the label in July 2001 was rich in communal messages and positive press. Their first single release on Finger Lickin' 'Thinkin About You' led to licensing deals and scooped sales worldwide. As the year progressed, the “Drumattical” album samplers occupied the DJ Beats chart and saw massive club support from the underground breaks DJs right up to Boy George, Judge Jules and Pete Tong. And wedged into the latter end of 2002 is Drumattic Twins' 'Feelin Kinda Strange', currently being plastered on Australia's Triple J airwaves as well as becoming a hit in Belgium, Czech Republic, Germany and the Netherlands. Spain, Holland and France's Transmusicales festival have undergone a dose of Drumattic Decks'n'Effects with the show being an exhibition of Nick on vinyl control and Lanx on keyboards with sampler navigation. The Drumattic's studio is based in Peterborough where Nick has run his successful weekly club night Bungalow (not quite house!), while partner in drum-criminology Lanx is based in the north of the country. Geographical constitutions need not be a problem for these two for they have defied physical laws by making a modem another essential production tool: Nick and Lanx record over the Internet! “We use an active text window alongside our sequencers…” Nick explains, “…and samplers to engage in file and sample transfers while continuously online. It's really just like being in a studio with someone but you can't see them.” The pair are part of only a handful of artists who use technology in this way. If bitten by inspiration or a phonecall by Lee Coombs in the middle of the night, feedback on the latest drum-sequence is merely an emoticon away. Add 12 years of working together, and you have yourself dance music that will compress time and space around you with its explosive, dramatic package of smokin' sound. Into the bass and blackhole you go. It's no wonder the standard is out of this world. 2004 was a whirlwind for the Twins. They reformed as Shades Of Rhythm and are performing live sets with MC Rayan at some of the biggest clubs in the UK as well as wowing crowds with their amazing decks 'n' fx sets. The release of their single “Le Funky” / “Rock Steady” received rave reviews from anyone with a shred of musical taste and they played to sell out crowds in every city on their massive Australian tour earlier this year. 2005 is proving to be just as great for them. Not only have they just delivered 2 of the hottest tracks of the year, they have just completed a remix for breakbeat mates Splitloop (Against The Grain) as well as popular act Simon Paul (Splank! Records). They have also just completed the theme music for new BBC TV show “No Waste Like Home” and “Twister” is featured on brand new computer game “Wipeout Pure” as well as the Plumps new album “Saturday Night Lotion” They're back and they're smashing it up!