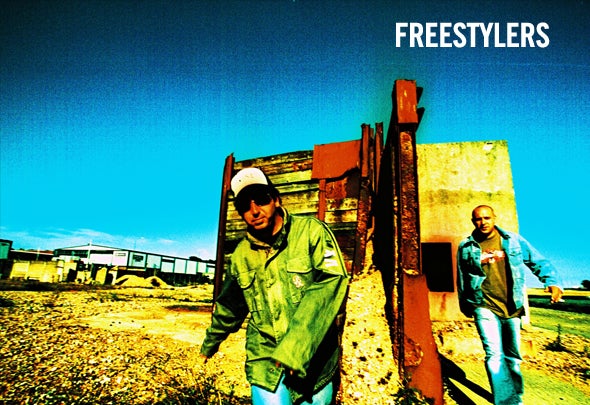 These breakbeat banditos first hooked up after a chance conversation exposed their joint love, some might say bordering on obsession, for music "We were just chatting about old hip hop records", recalls Aston. "And realised we both owned all the same tunes. We'd both been making house and Matt had this idea for an electro track so we just started working together." That electro track became 'Drop The Bomb' and on release in '97, launched the pair as the Freestylers. "The first record we ever sampled was by an act called Freestyle", Aston explains. "At that time sampling played such a major part in our sound, we felt it would be a fitting name. Raised on a diet of Public Enemy, Afrika Bambaataa and, erm, The Jungle Book ("That soundtrack was the first record I ever bought", laughs Aston. "I was the original junglist!"), the Freestylers sound is rooted in hip hop but has evolved into a unique British concoction, taking in everything from dancehall to reggae, electro to soul and breakbeat to drum and bass. "It's pretty tricky trying to sum us up," admits Matt. "Our sound is pretty raw, raw and very instant. Basically it's like breaks for the masses, but as we've both got pretty eclectic tastes we bring a whole spectrum of influences from the seventies onwards". "Hip hop heads come to see us," continues Aston. "But so do ravers, reggae fans... it's quite mad really - two funky white boys bringing all these people together". The duo’s unique blend of party sounds has seen them perform everywhere from Ibiza to Ipswich, Prague to Peterborough, finding time to wow the crowd at Glastonbury and tour America along the way. "We’ve played some amazing gigs recently," Aston explains. "The Big Day Out in Australia last year was amazing, not only were the crowd going crazy for the show but I also got to meet the Beastie Boys , who have always been idols of mine"."We’ve just got back from one of our more mental gigs too", Matt adds. "We were playing at the Shambhala Festival outside Vancouver, which is this mad event organised by a group of hippies. The performance was great but we both came back tired and with less than perfect memories". "Although we remember being appointed Shambhala Warriors!" Aston laughs. In the three years since their last album the pair have also released a number of underground club hits under the guise of S.C.A.M. as well as making the most of the new avenues they found open to them after the success of 2003’s ‘Raw As Fuck’ and the stand out single, and top 20 hit, ‘Push Up’. This showed the critics that they aren’t just a one-trick breakbeat pony and allowed the guys to exploit the live dynamic they’d been working on for a while. "The live band shows we did around that album were wicked", Aston comments. "And ‘Push Up’ was always a favourite. We were really able to show another side to our sound and this is something we’ve built on with the new album". The new album ‘Adventures In Freestyle’ sees Aston and Matt wear their dancefloor-friendly hearts on their sleeves once again. Ranging from the techno-punk stylings of ‘Security’, through the cinematic-string soundscape of ‘Infernos’, to the five and a half minutes of typical Freestylers filthiness that is ‘Painkiller’, which sees them team up with Oz drum and bass bods Pendulum, the album is a unique concoction of styles, pinned together in many cases by the vocal talents of long term studio partner, Marcel aka SirReal. Marcel’s anacreontic lyrics espouse the virtues of everything from living the fast life to drinking Carling Black Label, on a slew of the album’s highlights. Elsewhere the album twists from the lyrical battering of ‘Fast Life’ to the trademark Freestylers booty bouncing on Jump ‘N’ Twist, while ‘Could I Be Dreaming’ comes on like Fun Lovin’ Criminals on a day trip to Brighton. Smoky soul samples are the order of the day on down-tempo gem ‘Pocket Full Of Sadness’, while newcomer Corrina Greyson adds her vocals to ‘In Love With You’, a track that seamlessly blends the boys’ song writing sensibilities with their breakbeat heritage. "All of the vocalists we’ve worked with on this album are underground or unknown", explains Matt. "We didn’t want to go down the route of using big names to get noticed, we hope that the songs will do that for themselves. We’ve been working with Marcel for a few years and his style just seemed to fit perfectly on the album. He’s also been touring with us, along with Valerie M and the rest of the band, and really delivers something special when we play live. He can work a crowd perfectly, rather than just chatting non-stop over the records and has become an integral part of the Freestylers live experience". A live experience that can next be enjoyed at London’s Scala on October 4th as the guys launch ‘Adventure’s In Freestyle’. "We can’t wait to play the Scala," Aston explains. "The last time we played there was 1998, so it’s like a homecoming. We’ve taken our sound around the world and now we’re back to make people dance their fucking arses off!"