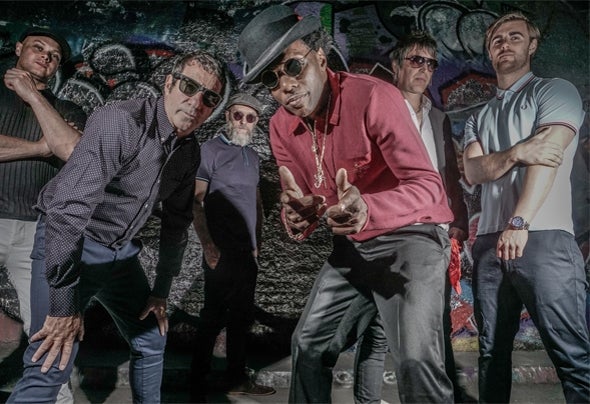 One of the hardest working bands in showbusiness, Barry Ashworth and his motley crew have added a much-needed swagger to the UK dance scene in recent years and new album ‘Crazy Diamonds’ finds the band at their uncontrollable, bass-driven best. A rampant mix of dub, reggae, ska, punk, breaks, beats and drum ‘n’ bass, the album is a full-on dub-quaking extravaganza, built for big fields and summer sound systems. It also happens to feature some of the biggest names in the game including Dancehall dons Beenie Man and Cutty Ranks, reggae singer Earl Sixteen, hip-hop act Too Many T’s, seminal MCs Navigator and the Ragga Twins, and long-time collaborator Lindy Layton. Tracks like killer new single ‘Crazy Diamonds’ (ft. Too Many T’s) or summer-anthem-in-making, ‘Rise Up’ (ft. Earl Sixteen and Navigator), prove that the Pistols are one of the best around at rockin’ the joint. This is futuristic skank, complete with blazing horns, brazen brass and epic drums and bass. Proudly working class as a band, the Dub Pistols have been tearing up venues and festivals throughout their career. Inspired by the Second Summer of Love, the band were founded by ubiquitous Londoner Barry Ashworth in 1996 and have been at the forefront of beats culture ever since.Known for their rhythmical blend of bass, turntables and horns, their genre-mashing abilities has seen them work with some of their biggest heroes including The Specials, Horace Andy, Madness and Gregory Isaacs. “The band’s reputation as an explosive live act has seen them turn into super-tight festival regulars, with the Dub Pistols headlining some of the biggest festivals in Europe including Glastonbury, Bestival and Beat-Herder.