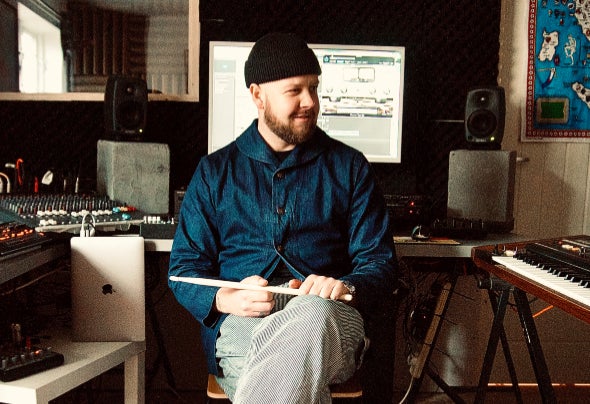 Sheffield musician Benjamin Harris, better known as Yarni, is classically trained... at making it up as he goes along. Yarni’s never been one to shy away from throwing himself out there and learning on the job. He gets by playing drums, percussion, guitar and keys, and this DIY attitude has enabled him to pick up a few admirers along the way. The late Andrew Weatherall described Yarni as an “amazing artist.” 2021 saw him introduce some local instrumentalists to the Yarni project to help him realise his vision of creating jazz-fusion music. His self-released single ‘Transitions’ picked up major support from Jazz FM, and several from Worldwide FM including the legendary Colin Curtis. Yarni’s sellout 2021 LP ‘Boro’ gained further support from the likes of Electronic Sound Magazine, Luke Unabomber, and many more. His latest offering is ‘Pigna’. For this new LP, Yarni enrolled musicians to contribute trumpet, saxophone, flute, euphonium, cello, bass, and guest vocals. This additional input – the Yarni Ensemble – has transformed the artist’s sound. The album spans jazz-funk, disco, and vocal tracks with a trip-hop influence. It’s testament to Yarni’s ever-evolving style, and his refusal to be pigeonholed.