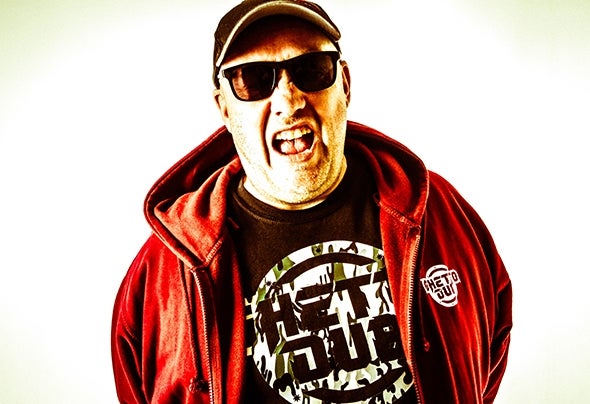 The man like the DJ Vinyl Junkie... A product of the late 80s / early 90s rave scene. Established himself as a DJ in his hometown of Bristol in 1991. Has played at hundreds of events all over the UK and abroad. Began producing in 1994. Owner of Warehouse Wax Records.After 20 years in the game Vinyl Junkie (John to his mum) is currently resident at Fantazia and Illusion, as well as playing various one off slots up and down the country for a wide variety of promoters. At the start of 2011 he compiled and mixed an album for called FUTURE RAVE ANTHEMS 4. It won the Best Album award at this year’s Nu-Rave awards in London. This added to his award from last years Nu-Rave awards, where he was the winner of the Music Scene award, for his contribution to the scene, and got 3rd place in the categories, best DJ and best album.REWIND BACK TO THE BEGINNING...In March 1991 the Vinyl Junkie was unleashed on an unsuspecting public in a small club on the outskirts of Bristol called Fairways, at a night he promoted himself called ‘After Dark’. This was the first of many and he soon started to pick up a strong local following, which secured him gigs at many other clubs in and around Bristol. At the end of 1991 John played at Vibes Alive at the University of the South West of England. This at the time was probably the biggest event in the Bristol calender. The Vinyl Junkie tore the roof off and was made resident.Over the next two years bookings came from promoters all over the country like: Ektos, Total Kaos, Obsession and Quest as well as lots of local club promoters. Along the way John had met Rob Bryant & Paul Shurey, who were at the time Promoting Universe, this eventually led to him playing in the main arena at Universe's first ever Tribal Gathering in April ’93. He also played in the hardcore arena at the 1997 Tribal Gathering.John first started producing in 1994 and has since completed an honours degree in Creative Music Production and Technology, for which he was awarded first class honours. In 2003 he set up Warehouse Wax Records with the original intention of recreating the sound of 1992 UK hardcore, but with modern production qualities and techniques. This label spawned a whole new generation of labels and producers, whose music eventually became known as Hardcore Breaks, which is now a genre in its own right. Today, Warehouse Wax is still operating as a digital label and continues to push the boundaries within the UK breakbeat scene, currently pushing a new hybrid of the sound which has been labeled “Future Jungle” or “140 Jungle’.