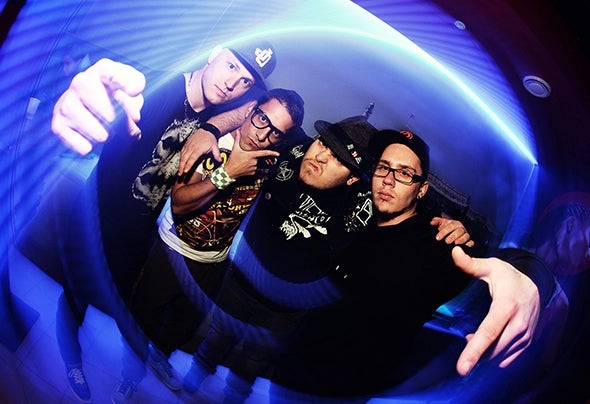 Hex is a Slovenian cross-over electro punk band formed in 2010. The group consists of producer and DJ Davor Lonzarič (aka Dahow), scream vocalist Max Power, rap vocalist Omar Ismail (aka MC Omis) and guitarist Seba Vrbnjak. They draw inspiration from early punk-rock, rap and metal bands like Rage Against The Machine, Public Enemy etc., as well as new electronic music genres drum'n'bass, dubstep and electro.Dubbed "One of the Best Balkan Acts" by the Croatian Exit Festival in 2013, Hex attracted attention with a few performances, especially at the Slovenian Music Week. Even though the group was not selected by the scouts of the foreign partner festivals, Hex got to perform as an opening act for Skinred at the opening of this year’s Lent Festival, whereas their greatest success was their recent performance at the main stage of the Warrior’s Dance Festival in Belgrade. The bands that performed together with Hex were The Prodigy, Skrillex, Caspa, Zane Love and Lollobrigida. The band were again to share the stage with The Prodigy at the Exit Festival in 2013, alongside the likes of David Guetta and Fatboy Slim.The band's release Fighters For The Sun, which came out on Swedish record label Dansant, includes 3 new songs. One of the songs was made in collaboration with Slovenian DJ and producer CLZ (aka Clinkz). The music video has been on heavy rotation on MTV in Europe.