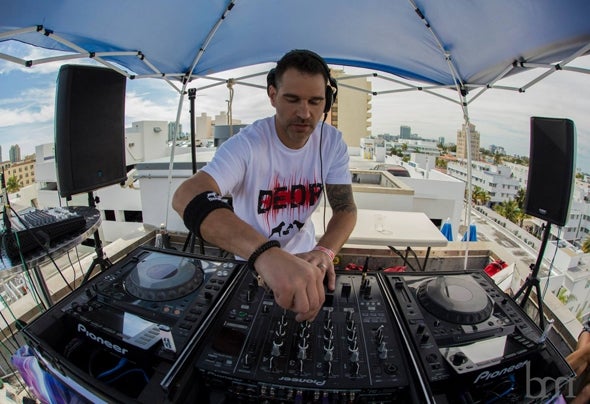 Rob Silas "DJ Si-Dog" Moved to Orlando from CT in 1993 after college, where he was quickly was introduced to the Florida EDM Rave scene. Rob moved to Florida to find a band as a Drummer by trade, but was quickly consumed into the Orlando EDM club scene and decided to start DJing and producing EDM in 1994. Signed to the Indie Label Phattraxx in 1997, He released tracks under that label until he made his own label DogEatDog Records that specialize in Breakbeat EDM production & event production as well. www.facebook.com/DogEatDogRecordsSi-Dog Dee-Jayed at Huge events over the years such as Zen 98’, and Usuaya in Gainesville & Jacksonville in the 90’s. He also performed at numerous night clubs around Florida. Simons, Firestone, and The Beacham until 2000 to name a few.. In 2000 a new Hartford CT after-hours club called him to be the head DJ and international talent promoter from 2000 to 2004, so he resided up in the NorthEast for that time, and is responsible for bringing Hartford on the EDM map in the late 90's. Si-Dog also had his own radio show webcast Stim-U-Late, (fathered by the Trance Domain) and then starting playing gigs in the Northeast From Philly to New Hampshire. www.facebook.com.SiDogOfficial. Si-Dog is a webcast Dj as well with his own u-stream radio station where you can watch him over the internet when he performs as well. www.ustream.tv/channel/doggymixRob got married in 2006 and started a family, and now travels back and forth to Florida 10 times a year. Recharged in back in the Florida Scene, Si-Dog has been producing tracks again on DEDR, he has many charted tracks on Beatport's Top 100 which include remixes for Deekline (that won a World Wide remix competition), and Si-Dog has also collaborated with Top 10 Producer Agent K among others, as well as his own monthly tracks on Beatport on DEDR, and other labels. In the early Vinyl ERA he has produced many records that were favored by Florid's top Djs, with his is 1st track he ever produced in 1999 "Kick that Rhythm" sold 3000 units.Rob’s other passions is event production, DEDR threw a huge event at Firestone in December 2012 called the Leaders of the True School, Rob Silas was a presenter of the show, who showcased Colombo in is 1st ever Florida appearance from Spain. and is also back throwing events at WMC which he’s always done over the years. He has partnered up with Glyn Morgan of FSOB and is involved with Dr P Booking, Old Skool Reunion and LOTS 2 to close out 2013 in Florida. In March of 2014, DEDR celebrated 15 years with a huge event in South Beach Miami, on a Rooftop pool with the biggest names in the Breaks Industry on the bill AND in attendance!. DEDR will also produce "The Reunion 2014" in Orlando, and LOT S-3 as well.Rob’s still loves his old skool fan base as well, his soundcloud page will have all his work from over the years and current remixes as well, ALL and ALWAYS for FREE DOWNLOAD on www.soundcloud.com/Si-Dog.. DogEatDog Records soundcloud page has Rob’s Original work, which is sold on Beatport, I-Tunes, Trackitdown, Juno, and Amazon. www.soundcloud.com/DogEatDogRecords , Si-Dog’s youtube page also consists of Videos of his shows and his produced tracks as well.