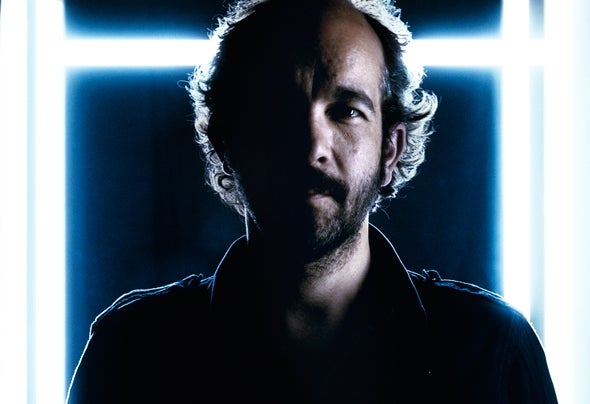 Etienne de Crécy is a key figure of the international electronic scene. During his 20-year rise to the summit, the French producer has cut some of the world’s most influential electronic albums: Pansoul (under the pseudonym Motorbass), Super Discount 1, Tempovision and Super Discount 2. He has also made around 30 EPs and done some 40 remixes for artists such as Kraftwerk, Air, Moby, Morcheeba, Lil’ Louis and Z ombie Nation. As well as being recognised for his versatile and potent productions, Etienne de Crécy is also a keen DJ who is always a hit with the crowd and his live shows with the giant Beats’N’Cubes structure swept all before them on five continents.After making several outstanding EPs in 1993/4, legendary duo Motorbass released their Pansoul album in autumn 1995. A few months later Daft Punk’s Homework arrived. These two albums were the cornerstones of the emerging French Touch, the wave of electronica that put Paris firmly at the centre of the musical map.In 1996 Etienne de Crécy launched the Super Discount project. On this memorable album, bursting with a euphoric and mischievous brand of out-and-out house, he crafted most of the tracks under a range of pseudonyms and also invited his friends Air, Alex Gopher and Mr Learn. Just like Motorbass’s Pansoul, this fresh and spontaneous sounding record imposed itself as one of the driving forces behind the French Touch and set the standard for electronic music in France and around the world. The album also launched Solid, one of the first French electronic music labels, which was set up by Etienne de Crécy,Alex Gopher and Pierre- Michel Levallois. Solid went on to bring out dozens of EPs and a dozen albums (Etienne de Crécy, Alex Gopher, Cosmo Vitelli, Wuz, etc.).In 2000 the album Tempovision was the crystallisation of a digital and futurist kind of soul music inspired by our everyday confrontation with the cathode-ray screen. Etienne de Crécy, the perpetual trailblazer, used this disc to break the shackles of pure house music, delve deep into dub and come up with a hypnotic sound helped by American vocalists Belita Woods and Michael ‘Clip’ Payne.Etienne de Crécy revived the Super Discount project in 2004, but the second volume was musically nothing like the first, made eight years previously. Electronic music had moved on and Super Discount 2 plunged into a radical world of electro-techno. On this new volume, which he made and produced on his own, Etienne de Crécy invited his friends Philippe Zdar and Boom Bass (Cassius), DJ Mehdi,Alex Gopher, Julien Delfaud and Mr Learn. This disc reproduced the freshness and the spontaneity of the first volume, while also unleashing some real dancefloor energy. From 2004 to 2006 Etienne de Crécy toured with the Super Discount 2 project.That three-year tour gave Etienne de Crécy an appetite for playing live. So he came up with the idea for a new project, baptised Beats’N’Cubes, it was a genuine live show played entirely on machines and without a laptop. It was utterly innovative and Etienne de Crécy developed dynamic, crunchy electro-techno textures mixed with dirty, grating sounds bursting with distortion. This peculiar, original live show came into its own in the visually impressive set design imagined and designed by the Parisian collective Exyzt. Standing alone in a giant 6 metre by 6 metre cubic structure and bombarded with original video projections, Etienne de Crécy took the pulse of the new electronic generation over a series of performances all over the world.