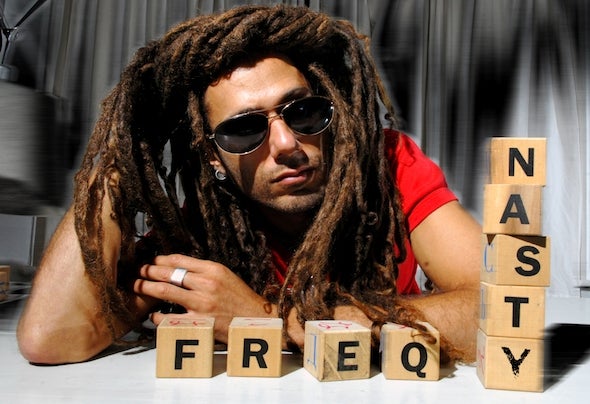 Born in Fiji, raised in New Zealand and formed musically in the dancemusic revolution of London in the late 90’s, FreQ Nasty started his career on the seminal UK label Botchit & Scarper in the late nineties, moving to SKINT Records in 2003. He went on to release a slew of cutting-edge records, collaborating with and remixing a diverse range of artists including Fatboy Slim, Kelis, KRS One, Roots Manuva, Rodney P, and Reggae legend Junior Delgado. 2008 saw the release of ‘Creator’, his crossover hit collaboration with MIA producer Switch and NYC hipster Santogold, and the ground breaking FABRICLIVE 42 mix CD, which was picked as DJ Magazine’s compilation of the month. He is one of Burning Man festival’s most loved DJs, where he brings his signature mix of Drumstep, GlitchHop, DubStep and all things Bass heavy every year. The FreQ Nasty single ‘Dread at the Controls’ was released through California’s cutting edge bass music label Muti Music in January 2011. The A Side is a fusion of lush Detroit strings, skittery 2-step beats, wobble bass, and a stupendous glitched-out dub-step breakdown. The B Side ‘Drum Play’ is a drum-step roller with the speed of drum and bass and the swagger of dancehall. This release launched an Australia/New Zealand tour and the 17-stop North American ‘Monsters of Bass’ tour with Crunkstep producer Marty Party and GlitchHop artist Opiuo. 2011’s freshest releases are ‘1000 Buddhas in the Pureland of Bass (Moombhacore Remix)’ featured on Muti Music’s AcidCrunk compilation, and FreQ’s ‘Low FreQency Pureland EP’ coming out in December. A free download of ‘Warm Dark Place (Eyes on the Prize mix)’ - a Glitch Hop and Drumstep hybrid featuring a cheeky vocal snippet from Hip Hop legend 2Pac – is available now thru his newly redesigned FreQNasty.com site. His latest side project touring the California festival scene, Dub Kirtan Allstars, was formed by FreQ Nasty and David Starfire as way of opening up the Yoga tradition to underground dance music club audiences. To find out more, visit www.FreQNasty.com/Dub-Kirtan-All-Stars/