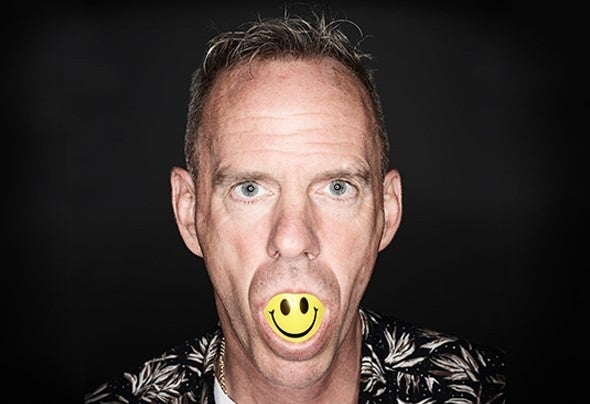 Norman "Jack-of-All-Genres" Cook, in addition to his former occupations as bassist for the Housemartins and one-third of acid house hit makers Pizzaman, is also the man behind one of the most popular of the new flock of English "Brit-hop" producers, Fatboy Slim. Releasing his Fatboy material through club staple Skint, Cook's raucous blend of house, acid, funk, hip- hop, electro, and techno has added to his already formidable reputation as one of the foremost all- around producers on the U.K. club scene.Born Quentin Cook in Bromley on July 31, 1963, Cook joined the Hull-based pop group the Housemartins in 1986, replacing founding member Ted Key. After the group split the following year,Cook became involved with the burgeoning acid house scene, pairing with producers Tim Jeffrey and J.C. Reid toward the end of the decade to form Pizzaman. The trio nailed three Top 40 hits together ("Trippin' on Sunshine," "Sex on the Streets," and "Happiness") before Cook splintered off to record with similarly styled outfits Freak Power and Beats International in the early '90s. He shut most of his other production activities down in the following years to focus on his latest incarnation, Fatboy Slim, which began with a trio of singles and the full-length Better Living Through Chemistry.Cook was also called in to add his remixing skills to Jean-Jacques Perrey's proto-electronica classic "Eva," released as a 12" and CD single in 1997. In addition to his FBS work, Cook also recorded the Skip to My Loops sample CD, a popular studio tool sporting a mélange of sample- ready drum loops, analog squelches, and assorted noises. In early 1998, his remix of Cornershop's "Brimful of Asha" spent several weeks at number one in the British charts. Fatboy Slim's eagerly anticipated second LP, You've Come a Long Way, Baby, followed later that year. The album went platinum in the U.S. and spawned two international hits, "The Rockafeller Skank" and "Praise You," which also boasted a Spike Jonze-directed video that earned three MTV Video Music Awards as well as two Grammy nominations. "The Rockafeller Skank," "Praise You," and other songs from You've Come a Long Way, Baby ended up on countless soundtracks and commercials, cementing Fatboy Slim's unique position as a critically acclaimed and immensely popular act. Cook also recorded several mix albums, including the first disc of the Radio 1 compilation Essential Selection, Vol. 1 and his own On the Floor at the Boutique. The latter was released domestically in the U.S. in early 2000 to help fans withstand the wait for his third album, Halfway Between the Gutter and the Stars, which arrived that fall. Two mix albums -- Live on Brighton Beach and Big Beach Boutique II -- appeared in 2002. During 2003, Cook and his wife -- popular British TV presenter Zoe Ball -- separated for a brief period. They soon patched things up but the split was a heavy influence on 2004's Palookaville, the most laid-back and moody Fatboy Slim album yet. Collecting his singles along with a couple of important remixes, The Greatest Hits: Why Try Harder appeared in 2006. In 2008, Cook announced he would be retiring the Fatboy Slim name and launching a new project, Brighton Port Authority, or the BPA for short. As of 2009, the Fatboy Slim name was still appearing, such as on the 2009 mix CD Dance Bitch, and as BPA,Cook released I Think We're Gonna Need a Bigger Boat in 2009. His next project, released in 2010 as Fatboy Slim, involved production work, collaboration, and co-billing with David Byrne on the Imelda Marcos concept release Here Lies Love.Source: All Music Guide