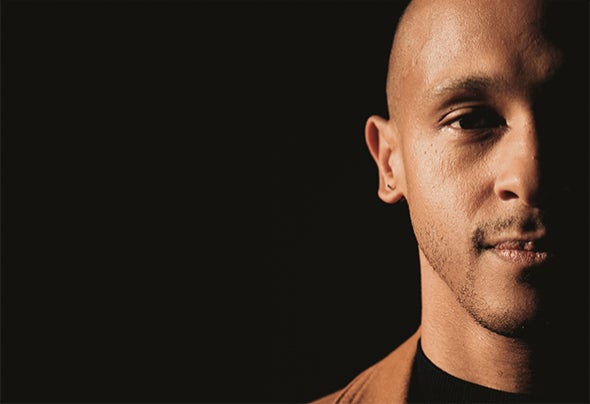 Born in 1984 in Lisbon, this is also where his heritage converged with his mother being originally from Angola and his dad from Cape Verde. DJEFF brings us a sound frequently described as Afro Tech. Back in 1999 he started to attend the matinees at an historical club in Lisbon - Bauhaus. DJEFF takes this opportunity to observe the DJ as his friends spent most of their time dancing. A spark was lit in him which then propelled a whole new journey. He then purchased a mixer and two CD players whilst also starting to collect dancing records. As he does his research and investigates more about different styles and approaches, DJEFF ’stumbles’ upon Erick Morillo; this global reference in terms of mixing and djing, that ended up becoming the inspiration behind DJEFF’s work. In 2002 he then started djing at family functions and school parties, before having his first chance to start learning from a more experienced DJ. After graduating in Design & Graphic Designs back in 2008, at the age of 24 DJEFF decided to move to Angola (Luanda). It's there that he started working on music production, greatly influenced by the surrounding ambience. Two years later, he presented his first original track named “Canjika”, co-produced with Dj Silyvi and released through Pandora Records. As time went by, his original tracks and remixes started making noise overseas. Louie Vega, Joe Claussell, Black Coffee; among many others started supporting but also played his tracks. His debut album “Malembe Malembe” came out in 2011, co-produced with Dj Silyvi. This album came out through Kazukuta Records - his own label. Kazukuta Records was the first electronic focused record label coming out of Angola. The main objective was and still is, to provide a platform for talented individuals that might struggle to get their opportunity of releasing their music. The sophomore album “Soldier Ascension” came out in 2013. The sound of this second album of originals, was more of a soulful vibe incorporating African roots but also blended with house music. “Soldier Ascension” played a major role in helping DJEFF gain international recognition. Besides being played by several internationally renowned DJ’s, it also included remixes from the likes of: Tony Humphries, Boddhi Satva, Mr V and others. Fast forward to 2017 after release his third album of originals “Gratitude”, live performances at events like: Watergate, Rex Club, Fabric, Lux, Boiler Room, MEO SW, SunceBeat and Djoon Experience; consolidated DJEFF’s presence within electronic music circuit at both national but also international level. In 2018 after releasing three albuns and performing in some of the most prestigious clubs all over the world, DJEFF dropped “ZUGU ZUGU” through SPINNIN’ DEEPS. The track became a hit with the likes of Pete Tong playing it on BBC Radio One but also selecting it for “Pete Tong: Essential Selection (2018)”. The British Sport Channel, BT Sports, played “Zugu Zugu” as the entrance song for the football player Paul Pogba, on their Champions League program. Major Lazer and Black Coffee were some of the names that played this track. With the track “Beija Flor”, released at the end of 2019, DJEFF got a significant amount of airplay by two of the main Portuguese radio stations. At one of the radio stations, after reaching second place of one the most played songs weekly, “Beija Flor” ended up being one of the top 40 songs being played in 2019. Still in 2019, the EP “Time & Freedom” was released through Diplo’s new found record label focused on House Music - Higher Ground. Late 2020 released his fourth studio album of originals “Enlightened Path”. The first remix pack for “Enlightened Path” was released in 2021. It features the remixes of Henrik Schwarz, Shimza and Ian Friday among others.