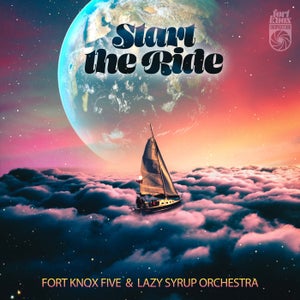 Pack your bags, the psychedelic funk ship is about to set sail with the latest collab to hit Fort Knox Recordings. Fort Knox Five and Lazy Syrup Orchestra are at the helm, so get ready to Start the Ride.

For the last decade Steve Raskin (FK5) and Duncan Smith (Lazy Syrup Orchestra, The Funk Hunters) have spent a lot of time together on the road playing festivals and shows. These two are huge fans of all types of funky music and have influenced one another and remixed each others songs, but never collaborated on an original tune until now!

Start the Ride is a mid-tempo trippy g-funk meets hip-hop floor burner that is a perfect blend of the two group's sound that can only be described as Fort Knox sticky-icky Syrupy drip. Incorporating chill wave synths and disco elements, Dunks and Raskin brewed the funky backbone of beats, bass and keys for the Syrup vocalists to flow over.

With his old school hip hop flavor, Thomas Workshop drops some psychedelic wordplay and storytelling on top of the bumping bass, bubbling keys, percolating percussion and west coast syrupy synths. Fans of the FK5 Twitch livestreams will know Mark Woodyard from their epic live looping DJ sets, and Mark's playful vocals slip and slide all over the tune.

Start the Ride is a guaranteed fun trip! This release is the fourth installment of the DC to BC collaboration series, following the funk meets glitch-hop Keep The Funk Real with Slynk, last summer's soul funk Playin' with Fire featuring Emily Molloy, and the dance-floor banger that started it all, Jinglin' Janglin', with K+lab. The release also includes an extended mix and extended instrumental for the DJs so get on board and Start the Ride.