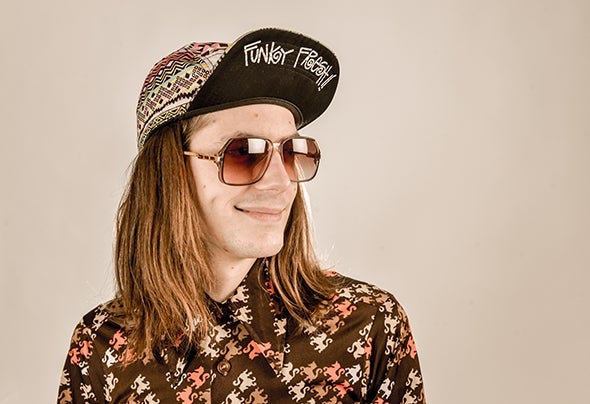 My real name is Evan Chandler, born 1986 and I’m originally from Brisbane, Australia but now I’m living in Vancouver, BC. I am most known for my ghetto funk style productions but I love playing and producing all kinds of funky stuff. Basically my rule is to only make and play music that makes you smile and for me that usually means that it’s got to be funky. I don’t take myself too seriously. I like to have fun with my music and add a little humor.I’ve always enjoyed music even from a young age. My father and grandma both have very large music collections and they were regularly playing music like Stevie Wonder when I was around. I took piano and drum kit lessons in school and eventually discovered a Playstation 1 game called Music. You could arrange your own songs with this game and I loved it! I was about 15 years old when I moved on to FL Studio and started experimenting with sampling and sound design. I think I was 18 or 19 when I got my first pair of turntables. I would practice scratching until my forearms hurt. I started DJing at a little cafe in Brisbane and played there every Friday and Saturday for six hours. The pay was terrible and I had to work another job but it was an important step for me to refine my sound and skills.After about 2years at the cafe a local DJ agency started to notice my party mashup style and turntablist skills. I quickly started playing shows all around Australia.My production started getting noticed by guys like Rephrase and Featurecast and they put in a good word for me at Goodgroove Records. I was asked to produce a three track EP which was released in 2009 and the good people at Shambhala Music Festival in Canada caught wind of the EP and booked me to play in the Fractal Forest. This was my first trip overseas and my first time playing a festival so as you can imagine I was nervous! Since then I’ve been releasing music on a bunch of different labels and touring around playing my funky sound.