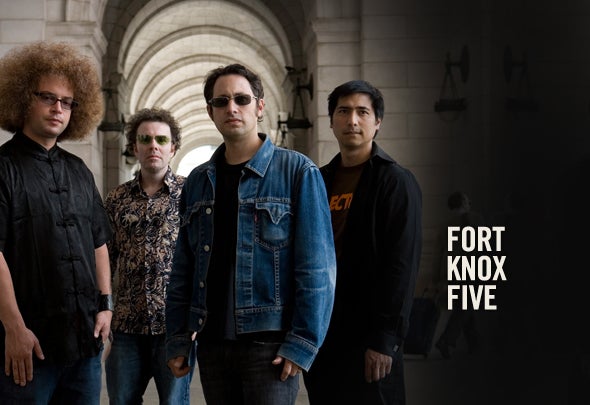 FORT KNOX FIVE (Fort Knox Recordings) The FORT KNOX FIVE is a leading force in the international funk and breaks scene. Having released an arsenal of floor rocking singles and remixes, the FORT KNOX FIVE has the midas touch for producing heavy hitting records. Sid Barcelona, Jon Horvath, Rob Myers and Steve Raskin are the masterminds behind the FORT KNOX FIVE. They established Fort Knox Recordings in 2003 to release party-rocking music that crosses tempos and defies genres. Their world renowned 'Fort Knox Sound’ has overtaken dance-floors with its distinct interweaving of live instrumentation with funky electronic breakbeats. In 2006 they released the critically acclaimed 'The New Gold Standard’ to showcase the groundbreaking sounds from their premier funk and soul label. The FORT KNOX FIVE’s talent for organic hooks has made them highly sought after producers and remixers. They have over 20 remixes to their credit, including monster mixes for A. Skillz and Krafty Kuts, Kraak & Smaak, Ursula 1000, Dynamo Productions, and Mo’ Horizons, as well as remixes for the legendary Tito Puente, Louis Armstrong, and Bob Marley. The FORT KNOX FIVE has coined the term 'Reminted’ to represent their signature remixing style. They released the first 'Reminted’ CD showcasing some of their favorite productions in a continuous DJ mix in 2007. Further cementing the FORT KNOX FIVE’s reputation, Afrika Bambaataa—the godfather of hip-hop—asked them to produce four tracks on his latest album Dark Matter Moving at the Speed of Light released on the legendary Tommy Boy Label. Tapped by URB Magazine for its annual “Next 100” list, the FORT KNOX FIVE’s music has been featured on major compilations including the highly regarded Hôtel Costes Sept — and has been licensed to numerous films, television shows, commercials and video games. Most recently their music has been featured in the FRINGE tv show on Fox, and video games Tiger Woods 2009 & Facebreaker. They also finished exclusive production on six original interactive tracks in the Fort Knox style for EA Sports Skate 2 & Skate It game soundtracks. As DJs, they know how to rock a party with infectious grooves that effortlessly move from funk, reggae, and hip-hop to prime time beats & breaks. Their unique DJ style has proven irresistible to clubgoers worldwide. They have performed on 5 continents, and in over 25 different countries. The Fort Knox Five have spun at some of the most prestigious venues in the world such as Madison Square Gardens in NYC, the Hollywood Bowl in LA, La Paloma in Barcelona, Fabric in London, and Die Registrateur in Munich just to name a few. Their music & skills caught the attention of Gwen Stefani, who asked the FORT KNOX FIVE to be her tour DJs for her Harajuku Lovers tour with the Black Eyed Peas. The Mandalay Bay Resort & Casino hired the FK5 to provide musical direction for Eyecandy Sound Lounge. During their tenure at the club, it was the 3rd highest grossing venue out of all of the MGM/Mirage properties. For their highly anticipated debut album, RADIO FREE D.C., the FORT KNOX FIVE took things back to their roots, and kept the vibe centered around the city they love, Washington D.C. Home to many pioneering artists like Marvin Gaye, Chuck Brown and Fugazi, they draw upon their city’s rich musical heritage of funk, soul, punk and hip-hop for their inspiration. The FORT KNOX FIVE invited their close friends from around the Nation’s Capitol, including Asheru (Unspoken Heard), Mustafa Akbar, Rootz & Zeebo (See-I), Sleepy Wonder, Javier Miranda, and Ian Svenonius (Nation of Ulysses/The Make Up) to help them create a record that captures DC’s musical diversity. Keep a close eye and ear peeled for RADIO FREE D.C. REMIXED due out in July of 2009. This compilation will feature remixes of original tunes from the RADIO FREE D.C. album. Such luminaries as The Nextmen, A Skillz, Nick Thayer, Deekline & Ed Solo featuring Shunda K, Malente, and Sub Swara lent a hand to rework these songs into a completely new form. In support of the release of RADIO FREE D.C. and RADIO FREE D.C. REMIXED, the FORT KNOX FIVE will tour as Djs, and a live band. For their live show, the FORT KNOX FIVE will perform as a full-on live band bringing many of the artists featured on the album to perform songs that will inspire, incite and unite audiences to “Funk 4 Peace!” Visit www.fortknoxrecordings.com for the latest info on FORT KNOX FIVE releases and tour dates. BOOKINGS: Bookings@FORTKNOXRECORDINGS.COM (the World) BOOKINGS: Hunter@PGAMUSIC.COM (North & South America)