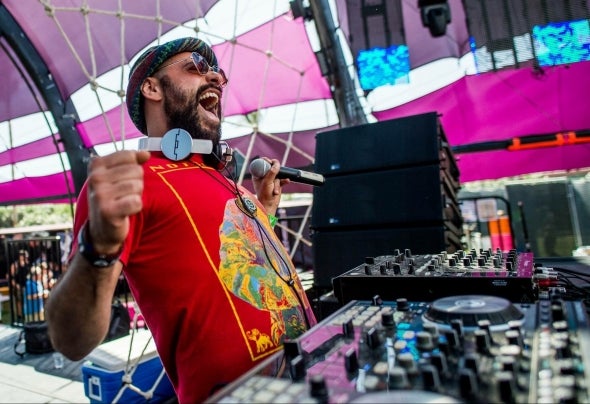 Portland Maine Native & Los Angeles based DJ and rapper EVeryman delivers a fluid flow, with conscious optimistic lyricism.His high energy beats convey influences from old school hip hop, and reggae which brings the crowd to life up on their feet. As a DJ, EVeryman drops anything from breaks, glitch hop, sexy house, to drum and bass.EVeryman, also one half of “Little Giants” A hip hop group formed with LA DJ / Producer Pumpkin a.k.a. Nicholas Alvarado. EVeryman, A.K.A. Evan Shafran is also a screen actor, and is currently starring in a web series called “Boyz In The Wood."EVeryman is currently on tour to pay tribute to Pumpkin, his best friend, Little Giants teammate, and musical comrade who passed away in March of 2016. The Pumpkin Tribute set includes unreleased Little Giants productions, classic Pumpkin remixes, and some of Pumpkin’s favorite songs.He has started a society called “The Little Giant Acorn Foundation For The Arts,” a non-for-profit charity organization established to provide enrichment for disadvantaged children and families through music & arts education. Also established, "Little Giant Acorn Records," To further the legacy, EVeryman will be realizing Pumpkin’s dream of having their music on vinyl and digital streaming worldwide.On his anticipated second album, Good Deeds, EVeryman has deftly followed up his breakthrough debut with thirteen scorching new tracks that find the versatile MC dropping his razor-sharp rhymes over a kaleidoscope of beats from some of the brightest producers in bass music.Good Deeds fuses the conscious “Golden Era” hip hop EVeryman was raised on with the future funk he now mixes up during his DJ sets, to create a collection of his most personal songs to date that will have you rocking with him from start to finish.Armed with his live MC set up as well as fresh remixes from the album that are exclusive weapons for his beloved DJ sets, EVeryman is ready to change the game.facebook.com/EVeryman.music