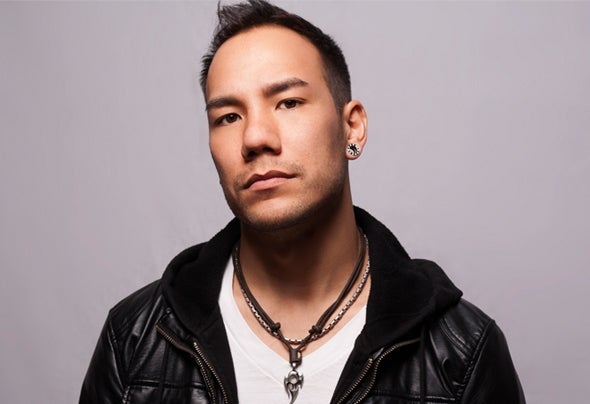 When Revolvr pulls the trigger, you feel it.Whether it's through an irresistible house music hook or propulsive progressive production, the Las Vegas-based artist and producer specializes in igniting emotions. Hands go up in the air and bodies shake when his fusion of styles pipes through the speakers. Locked and loaded with numerous tricks up his sleeve, Revolvr has arrived on the scene with a big bang.Revolvr a.k.a. Touvan Sughiarto officially entered the electronic music world in 2011, but the genre has been a part of his life for as long as he can remember. A fan of T he Prodigy and Crystal Method during his high school years, Touvan relocated from The Bay Area to San Diego to finish college, where he perfected his skills on the decks. While, a detour into the corporate world post-college delayed his eventual destiny, a sunrise at 2010's Burning Man festival changed everything."I was watching the sun come up, and something overcame me," recalls Revolvr. "It was like I got slapped in the face. I knew that I needed to be doing music. I wasn't happy in the corporate environment even though I was doing well in it. I wanted to walk away from everything I was doing and chase what I loved. I went home, quit my job, camped out in the studio for four months, and found my sound."That sound immediately became embraced by fans, contemporaries, and critics alike. His very moniker sums up how diverse its diverse nature. He reveals, "Revolvr doesn't reference a gun. The name points to the fact that my style revolves around so many different aspects of music. I take what I feel I connected to in each genre and infuse that into my own work, whether it's a remix or an original production." Collaborating with Donald Glaude, he dropped an incendiary and infectious remix of Scooter and LaVelle's "Beats Inside My Head" that set Beatport ablaze. Spreading like wildfire, "Beats Inside My Head" peaked at #2 on the site's Electro House Chart and #16 on the Overall Chart. Meanwhile, Tiësto added the track to his podcast and the live set of his mega-successful Club Life tour, exposing the remix to thousands nightly. It was Revolvr's first bona fide hit.About the track, Revolvr explains, "I connected with the song. The lyrics were catchy and I wanted to create something equally catchy musically. Once it exploded, I felt pretty good about my decision to focus on music 100 percent."Simultaneously, he dropped an original track entitled "Warface" that skyrocketed up Beatport's overall chart to #10 and infiltrated XM Radio and other platforms. For 2011, his Beatport Chart Rate was 100 percent. Within a short year, all of those numbers rose drastically. Facebook likes exceed 15k, Soundcloud plays are approaching 200k, and YouTube views are over 300k. Beyond that, his remix of Florence + the Machine's "You've Got Love" landed at #1 on Hype Machine.Soon, Chuckie, Zedd,Above & Beyond, Porter Robinson, Lazy Rich, Steve Aoki, Laidback Luke, Tommy Lee & DJ Aero were incorporating his music into their live sets, playlists, and podcasts. However, that was merely the beginning. Revolvr's 2012 single "The Beat Goes On" already illuminates another evolution for the artist. Coupling a colorful sample with sexy and slippery synths, it's a bona fide dance floor banger. "I took that sample from an interview with Randy 'Macho Man' Savage'," smiles Revolvr. "I wanted to do something different. There's a progressive vibe, but it's an electro track. It touches on a variety of sounds. The beat does go on, and I want to roll with that it."Then, there's Revolvr's remix of Morgan Page's "Body Work" [Featuring Tegan and Sara]. T he track is part of Page's latest effort, In the Air, as a bonus cut. It also shows another side of the artist as he expands into a skittering dubstep groove. Other remix highlights include a unique take on Luciana's "I'm Still Hot", which hit #1 on Billboard's Dance chart.On stage, his music really comes to life. Boasting a show comprised of mostly originals, he's played to packed crowds at Los Angeles's famed Avalon, Orange County's Yost, WinterFest 2012, Tulare Festival, Sugar Festival, and more. "I want to create an experience for people," he adds. "I like to see everyone jumping. My set is like a roller coaster. Everyone is along for an amazing ride."Ultimately, that ride is only going to get even bigger and better. He concludes, "I'd love for people to walk away feeling some sort of connection to the show or music. I hope the last thought they have is, 'I can't wait to hear that again'." — Rick Florino, February 2012