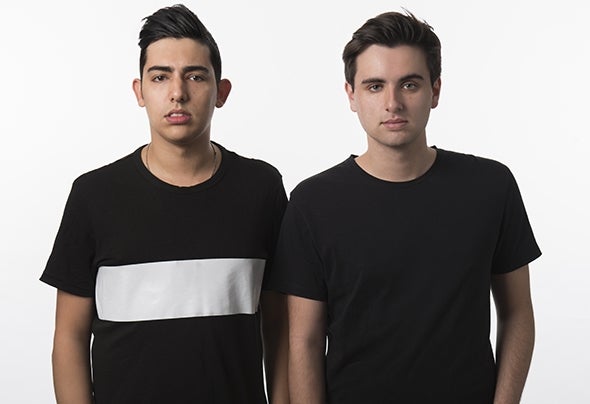 From the front row of a Tiësto show to a coveted spot on the Dutch megastar’s management roster, the story of Dzeko & Torres is equal parts dream and determination.The Canadian duo initially found each other through an online forum for Toronto club events. At the time, Luis (Torres) was working as a photographer and graphic designer, and Julian (Dzeko) as an event promoter. The two became fast friends and began DJing around the city’s club circuit and producing together on borrowed studio time while juggling part-time jobs. Their first electronic dance music moment of reckoning came at that Tiësto show, which provided a clarion call to pursue their musical passions full-time.“Tiësto was our main influence and inspiration,” says Dzeko. “After we saw him at that show and playing on that scale, we knew we were interested in doing that too.”The co-producers got serious about their studio work, releasing a highly regarded remix of Jus Jack’s “Can’t Wait” featuring Black Dog. The track caught the attention of Tiësto, who featured it on his Club Life podcast in 2011. For the two Canadian kids who had come up idolizing the artist, Tiësto’s support provided a musical springboard that encouraged them to continue chasing their dance music ambitions.“That was a big deal for us,” says Dzeko. “We weren’t the best producers at the time, but we knew we were doing something right to have him support our stuff. We decided then and there to give this thing a shot as a profession.”Over the course of a series of standout releases on such top tier imprints as Mixmash Records, Dim Mak and CR2 Records, Dzeko & Torres built a name for themselves on the back of their distinctive melodic sound, which they also explored on innovative remix reworks of indie favorites like Capital Cities and Imagine Dragons. The loyal fan base they accrued through their beloved podcast and ten-minute annual recap mixes helped elevate them to new headlining horizons and festival appearances at Ultra Music Festival, Tomorrowland and Tomorrowworld.Throughout their stylistic evolution and swiftly growing success, the duo continually kept Tiësto in the loop by sending tracks and demos his way. Their perseverance paid off at the end of 2013 when their musical mentor signed them to his prestigious Red Light Management group, a landmark event that the duo don’t hesitate to call “a dream come true.” Their Musical Freedom debut “Highline” dropped soon after, showcasing the intuition for upbeat melodies that put them on Tiësto’s radar in the first place. The subsequent months have been a welcome whirlwind for Dzeko & Torres, who have supported Tiësto at his Hakkasan Las Vegas residency and even appeared alongside the superstar during his headline performance at Ultra Music Festival’s main stage.Teaming up with Tiësto on a marquee remix of John Martin’s “Anywhere For You” to accompany their arsenal of forthcoming original productions, 2014 sports all the trappings of a monolithic year for Dzeko & Torres moving forward.