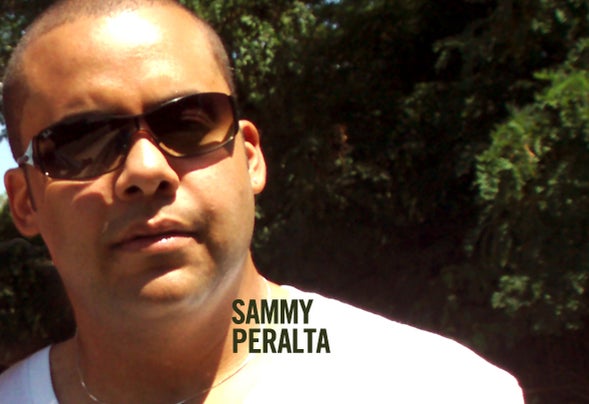 Sammy Peralta loves music. That pure and simple fact comes through strikingly clear as he sits at his piano tinkering with half-written tunes stored in the rack-mounted computerized studio he’s diligently put together in his spacious New York City apartment. Peralta’s music, much like his personality, exudes good-spirited warmth and energy. “I have to be careful,” he laughs, “because I can get so lost in the music sometimes.” Sammy Peralta, a native of New York, began developing his broad musical range when, as an elementary school student, attended a classical music concert. “I knew right then that I wanted to be a musician,” he now says. At that point, young Sammy was not focused on any particular musical style. He had discovered the language of music and knew simply, that it was one he had to learn to speak. “There was something about hearing the music live that touched my soul. That probably sounds corny, but it’s the truth.” Sammy was so awe-struck by the emotional depths music could tap into, that as early as junior high school he became an “outsider” when he opted for carrying his saxophone to school everyday instead of a football or basketball. By the age of fourteen, he was performing with the Manhattan Borough-Wide Orchestra in such places as Carnegie Hall and receiving the type of stellar accolades normally reserved for someone well beyond his years. It wasn’t until he entered New York University, however, that he began to 1 realize his potential. Peralta’s apprenticeship at NYU led to associations with some of the most respected musicians in different genres on, and behind the scene. Peralta’s refreshingly wholesome approach to life is reflected in the collection of songs he has written and produced thus far on various projects for other well known and recognized artists. Widely respected for his mixing craftsmanship and previous work with artists such as Gloria Estefan, Boyz II Men, and Mariah Carey, music guru and producer Sammy Peralta is a pertinent face in the world of dance. He has his hand in everything from producing, engineering, and writing music for an eclectic list of artists and musicians, including producer Winston Jones, TLC, the Notorious B.I.G., vocalist Karen Bernard, Janet Jackson, and Kenny G. Peralta is also one of today’s most prolific Producer/DJ/Artist based out of New York City. His DJ sets have been described as the sickest and most hardcore ever heard by clubbers and industry professionals alike. Peralta has been known to perform his tunes live during sets, taking the crowds into frenzy. Thus adding that extra spark to his live shows. A definite must see! On the production front, he is responsible for the massive hip-house electro monster tune, "SHAKE IT". This tune was released on Robbie Rivera's Juicy Music Label and licensed in over 35 territories worldwide, and was remixed by top DJs like Steve Angelo, Robbie Rivera or Eric Prydz. It was also featured on mix compilations by world renown Superstar DJs: Roger Sanchez, Robbie Rivera, Kenny Dope Gonzalez, John Acquaviva, DJ Dan and Steve Angello, just to name a few. In Addition, Peralta's label, "Funkatronik Music", is banging out tracks with multiple mixes weekly keeping a steady supply of fresh material flowing. Peralta credits jazz as being a prime influence when it comes to him being musically inspired and involved. He says it's the one true American art form invented and proliferated by African-Americans and Latino- Americans; his musical desires stem from jazz and venture into the areas of R&B, Dance and pop/rock. www.FUNKATRONIK.com