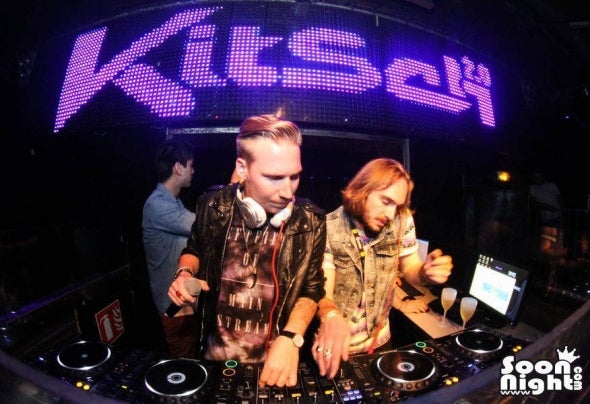 KitSch 2.0 is a French uprising duo from Marseille. Their studio is surrounding the Mediterranean sea, which probably accounts for their capacity of creating big waves in their music. Fully dedicated to a big dancefloor sound, they are growing thanks to a series of remixes and original tracks warmly welcomed by a lot of international DJ's such as David Guetta, Chuckie, T homas Gold, Michael Calfan, Ferry Corsten and many others...In January 2013, they were selected by famous Swedish duo Dada Life to win their 'Feed The Dada' remix contest. The KitSch 2.0 remix gained more than 100000 plays on Soundcloud in 1 week. After an incredible series of releases on international labels like Big&Dirty, S2/Pinkstar, Virus T Studio, Black Hole, they got signed to Mutants records (John Dahlback's label) for an Eitro's remix & their first big release : 'Housecoholic EP' (out March 4th of 2013).This track jumped into the Beatport Electro-House Top 20 in a few weeks and appeared to be the 2nd best sold track ever for Mutants. Housecoholic is more than a track. It'stheir leitmotiv, their state of mind. “With Housecoholic, our aim is to fuse several genres, it's a simple message of fun. It’s a state of mind we want to share with all the party people around the world.”Housecoholic is also the key name for their monthly radio show, now brodcasted on several international radios as Dirty Beat (South America), LightWave Radio (Greece), Prysm Radio(international web-radio) & Party95 FM in the USA...Very concerned to please their fans, KitSch 2.0 offer a free bootleg each week on their Soundcloud page : http://www.soundcloud.com/kitsch20. One of them were lately picked by Hardwell, whom support just confirmed the excellent dynamic around the french pair.After a stunning 2013 start, KitSch 2.0 will definitely keep on releasing several remixes and original bangers during the next months !John Dahlback about KitSch 2.0 : “These guys have a really incomparable sound. It’s fresh, fun and unlike anything else out there right now.”