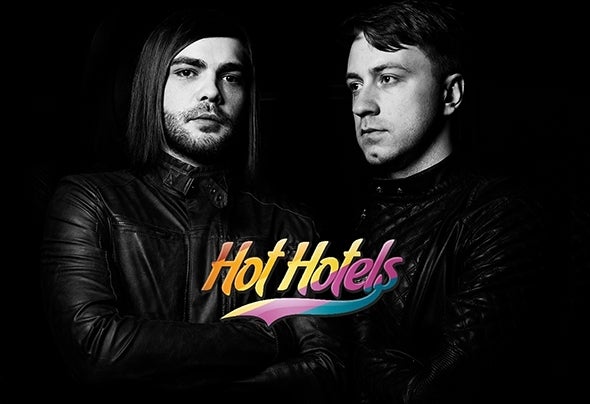 HOT HOT ELS. What’s Hot Hotels for you? What do you feel when you are listening to the music by Hot Hotels? If you haven’t thought about it yet, now it’s the best time to do it.This is the realm where anarchy and emotional unruliness are on top of everything in their best display.What about the music? Have you heard the music? They say it’s sparkling, unique and has a specific unforgettable flavour. People who hear the rhythms by Hot Hotels often find something touching their hearts.As sad as it may sound, most places where you could enjoy music of the kind have been wiped off from the face of the earth forever, not many of the remaining went underground. But the two new gifted genii challenged themselves to revive this exotic atmosphere changing it a bit according to the new canons.Hot Hotels isa brand new name risen to the forefront. Hot Hotels is a child of two Russian electronic music producers – Andrew Proland and Tim Gras (Artem Troitski). Huge life experience helped them discover the recipe of the secret potion of their music which is all about the unique and original sound, moreover the incredible blend of modern house and rare gracefulness enables this project to climb the musical Olympus confidently.Andrew Proland who has been successfully combining the careers of a dj, a club promoter and a radio presenter for more than ten years, is an expert on how to set, change and break rules on the dancefloor. His charisma attracts people and he knows how tofascinate people, how to mix all the ingredients into a whole which any clubber would go for.Tim Gras who can skillfully play all the musical instruments possible, using his talent, skills and energy he creates the atmosphere wherever he plays – from a piano in a Scottish castle to the “play” button in resort hotels.Their collaboration is inspired by dreams and is a way of thinking which is a part of lifestyle for both. The blend of their ideas, experience, emotions and two absolutely different views on music makes the cosmopolitan electronic project Hot Hotels an excellent guide in the world of electronic sound.The year 2012 became a flying start for Hot Hotels.Andrew &Tim Gras signed a contract with the famous Black Hole Recordings. Their work with the guru of electronic music from Holland Muzikjunki received a lot of positive reviews all over the world. The remixes on Muzikjunki “Robot” feat. Flash Republic and Muzikjunki “Blue eyed boy” feat.Anna Gold earned Hot Hotels a lot of popularity, making them one of the most promising European modern project. The track “Muzikjunki, Flash Republik — Robot (Hot Hotels remix)” was in top20 of Blach Hole Recordings and was spoken about as one of the most progressive existing at that time.The same 2012 year Hot Hotels produce a series of remixes for the vocal house music guru from Germany – Inusa Dawuda. The tracks “Khetama, Inusa Dawuda, Ees – Satisfaction (Hot Hotels Remix)” and “Violet Masters feat. Inusa Dawuda – In Music (Hot Hotels Remix)” are released with the label Kingdom Of Music.As a result of this co-production with Inusa Dawuda “In music” which was broadcast on the radio and hit the dancefloors all over Europe, was also rotated on 17 radio stations in 71 cities of Russia.“In music” release was became a success and could be heard all around the world, it was rotated by such radio stations as Prime radio (Greece), Wnmc Fm Michigan, 1 dance fm usa, 1 mix radio uk, energy dance radio new york, kik Fm Australia, Joy Fm australia, Xam Fm Japan, Play Fm Macedonia, Energia fm Brasil, Radio Lusitania CB Portugal, Radio na Balaba Brasil, KIss Fm Australia, Canal 7 France, Billboard Usa, Hfm radio Leicester, all4you radio Netherlands and many others!2013 confirms the position of Hot Hotels on the stage of world electronic music and makes it even more outstanding. 2013 became the year when the duet Andrew&Tim started their work with the Moscow sound producer Andrew Exx. The tracks “Deedee – Hurricane (Hot Hotels Remix) and “Andrey Exx. & Hot Hotels – Latenight Hunger feat. Manny”, which were released with the label Summerhill Music and Labels Da Way, gained a lot of respect from different house producers all over the world.2014. T he project Hot Hotels has developed into an uncontrollable beast that currently celebrates its success. Hot Hotels signs a contract with Milk and Sugar Recordings. Hot Hotels and Andrey Exx. “Peter Brown – Feel it (Andrey Exx &Hot Hotels Remix)”, “Andrey Exx & Hot Hotels – Dark Beat” rush into the Beatport top chart and break the download records!Hot Hotels has come into all successful recording companies’ attention. The next step to the top becomes a contract with Label Kiez Beats and their collaboration “Bruno Be & Dado Prisco – Uncle Jack (Andrey Exx& Hot Hotels remix)” which makes the project Hot Hotels ahead all the electronic musicians of the new era.All in all, it’s been a big journey for Andrew Proland and Tim Gras, pioneering a sound and attitude that has gained respect from fans and industry people alike! And there’s so much more to come.Now they are working on new hits and collaborations and they tour a lot.