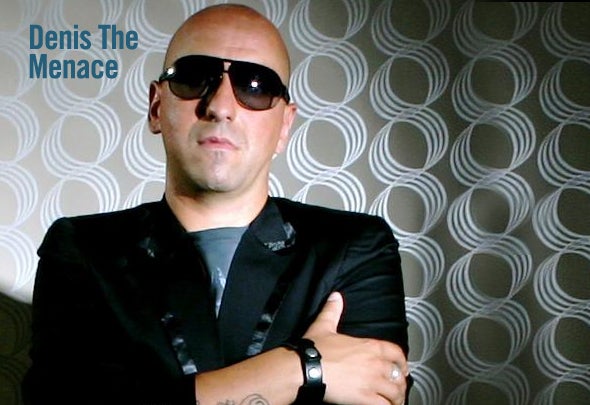 Denis The Menace, is currently setting the dancefloors on fire. He is on top of the list of most producers such as Axwell, Roger Sanchez, Erick Morillo and Milk & Sugar c... and releases on labels such as Nero, Joia, Subilminal, CR2, Vendetta and Royal Flush just ot name a few. But passion and love for the music is only one side of the coin. Denis must be considered one of the hardest working and most prolific producers, as a quick glance at his latest output reveals. The last two years have witnessed almost 30 of his productions and remixes in the UK, Germany, France, Spain, Sweden, Brazil, USA, Belgium and the Netherlands. Even Britney Spears and Madonna got their special treatment, when he remixed their common effort „Me Against The Music“ for Jive USA. In 2005, three of his tracks were listed well within the top 100 of the most downloaded tunes at traxsource.com, a key indicator for definite dancefloor stardom. Among his outstanding 2005 tracks, one has to highlight Jerry Ropero & Denis The Menace „Fuck U!“ (originally released on Royal Flush), a worldwide Clubsmash and all-year house anthem at the hands of the biggest international House DJs. Another piece of the cake was DTM & JR vs. Francesco Diaz „Time 2 Turn Around“ which idled at #1 of Traxsource Sales Charts and #2 of DJ Magazine’s Hype Charts. For 2006, we can expect even more heat as Denis The Menace & Jerry Ropero present Next Soul „Do You Really“ is scheduled on CR2 and already hot on air at Pete Tong’s BBC 1 radio show. Swedish top producer Axwell exclusively remixed his track “Coracao” (originally produced with partner Jerry Ropero) for Vendetta, ranking at #18 of the official Spanish sales charts in 2004) and turned it into the biggest track on Ibiza 2005. After Erick Morillo signed this Latin monster track with new remixes to Subliminal, „Coracao“ is now set to dominate the Winter Music Conference Miami 2006 and spread from there to global house hymn. Teaming up with Jerry Ropero, Denis The Menace has further created some big exclusive remixes for Eric Prydz („Woz Not Woz“), Axwell („Feel The Vibe“), Steve Lawler („That Sound“) and Danzel („Pum It Up“). Their steaming new production work, the exclusive remixes for Shapeshifters “Incredible” (released on Positiva, UK) stormed #2 of Cool Cuts Charts (UK) in January 2006, while the remix for Paris Avenue “I want You” (on Data, UK) reached DMC Club Charts UK #3. The support list of international DJs is next to endless, including such awe inspiring guys as Erick Morillo, Roger Sanchez, Judge Jules, Pete Tong, Milk’n’Sugar, Michael Gray, Stonebridge, Grant Nelson, Dave Lee, DJ Pippi, Axwell, Sebastian Ingrosso, Steve Angelo and many more. To round up his repertoire, Denis The Menace is also a true wizard on the decks. Even his rare critics are rumoured to leave his highly individual and thoroughly pumping sets flabbergasted and drenched in sweat. To put it short, whenever and wherever Denis steps on the scene, his growing list of supporters and an ever increasing crowd loves to go wild and party. Denis The Menace who started his DJ career as early as in 1988 currently operates from his Slipper Studios at Germany’s house music capital Hamburg and, apart from Denis the Menace, also releases under the project names of Avantgarde (remember the amazing 2003 relaunch of „Get Down Again“!), Clubworx vs. The Monsterz, Rhythm Divine and DJ Squad.