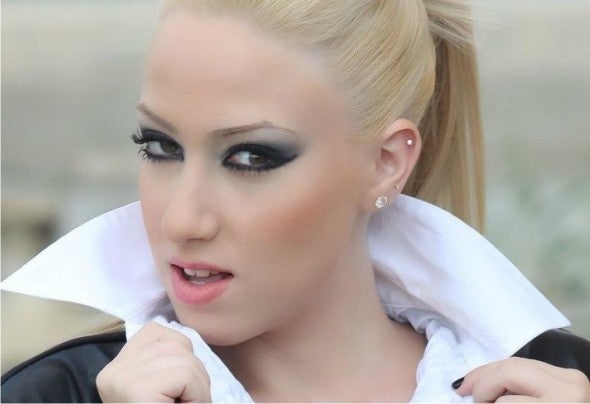 Born February 12, 1994 in Larnaka Cyprus, Christina started her music career at very early age, since she grew up surrounded by musicians from her mother’s side. At the age of six she had her first live appearance, performing with a large orchestra and by the age of ten she had accumulated lot of studio experience. In 2004 when she was only 10 years old she is invited by an artist to perform at his concert in Malta, where she impressed the audience with her natural ability of singing. By 2007 the MME from Cyprus was talking about her characterizing her voice as “ To Powerful for such a young age” and local Tv Shows were inviting her to perform with every opportunity. 2008 is an important year for Christina’s career…she is invited as a judge for Junior Eurovision organized by the National Television, CYBC. Respected for her vocals and ability of live performance, an English-Cypriot producer propose a collaboration and they traveled to UK for the recording of her first promo album, titled “From the Heart”. The album was air played by many local radio stations and abroad. A year later, in 2009 fifteen at that time, Christina was chosen by the Romanian performer Mihai Traistariu (Tornero, Eurovision 2006) to sing together a duet at his concert in Cyprus. The Romanian performer, touched by her voice, lost no opportunity to invite Christina as his Guest of Honor to an International Song Festival in Romania. Romanian newspapers and magazines talked about Christina’s collaboration with the Romanian artist. Since then she had lot of invitations as guest at various events and shows in Romania. For a teenager with a busy school schedule, Christina has traveled and performed to more than 100 shows in many countries, but the big success is in October 2011, when she releases her single titled “MY Reason”. Written and produced by the Romanian producer Catalin Dascalu, the song brought her an international recognition. Spanish record company Planeta Mix Records, released the song in many compilations and remixes by their DJ’s Promoted worldwide by Tv and Radio stations, My Reason became a Hit and very important TV shows and Magazines are talking more and more about her. Two months later, December 5, 2011, she Hit’s again with another single named Kiss which it become very popular especially among Greek people since some of the lyrics are in Greek. She was invited to Romania for promotion at two of the most well rated TV shows and important music sites announced and promoted the news. Her management company “ Magna’s Production” and her well-known manager Emanuel Vamvoukis booked Christina for summer 2012 when she will start world touring, next to very important names in international music industry. A new single “Hypnotized”was released 31/01/2012. Is a catchy dance song with lot of potential. Christina is already booked for March and April 2012 for a tour in Greece.