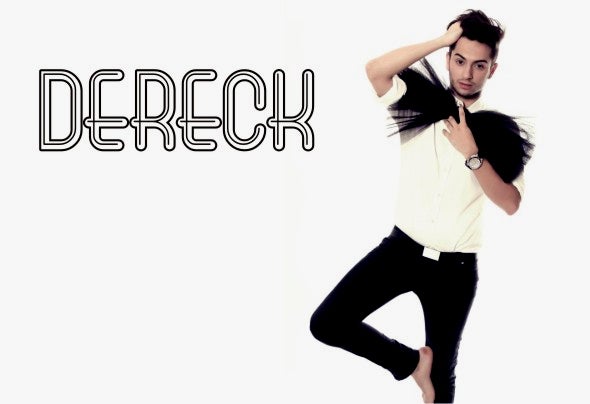 Dereck ( with his real name – Radion Bogdan ), is an romanian singer, born 16 February, 1990. Borned and raised in Tulcea ( Romania), he primarly studied at the School of Arts from his town. So he began since he was a child, being strongly attracted to arts, especially to music. Dereck studied violin for several years, and then he decided to take some singing lessons. He performed on a stage, for the first time when he was only 12 years . Dereck started his music career after a few years, when he decided to move and live to Bucharest. Dereck’s musical debut was in 2011 with his first recording song ”Siente”. He was invited by an TV Show, to have his first live appereance . He impressed the audience with his new musical style, his fresh and natural image and unique voice. Since then, some of the most popular TV Shows, were inviting him to perform and to present his musical project. Excited about his musical project, Planeta Mix Records( label & publisher in Spain), proposed a collaboration . At the beginning with the song “ Siente”, then, due to the collaboration success, with Dereck’s next songs “Te quiero” and “Ellatheia”. Romanian newspapers and magazines talked a lot about Dereck’s musical career, about his great songs and official videos . On his numerous TV appearances Dereck usually perform his new singles and talk about his musical plans and about his collaboration with the label from Spain. Dereck has a lot of invitations as guest at various events and shows, where he has the possibility to entertain his fans , and not only, with his pop-dance songs. He has the ability to create an incendiary atmosphere of dance. Dereck’s debut studio album, “A part of me” ( June – 2012), contains 9 recorded songs : “Ellatheia”, “Siente”, “Fahion Love”, ”Te quiero”, “Doar cu tine”, “Doar tu”, “Te caut”, “Am nevoie de tine”, “Ma dona”, and few remixes. Dereck embraced in his album that new musical direction – romanian pop-dance style, made globally known by INNA( romanian singer). In 2012 Dereck released 4 music videos, and he received a positive feedback from the public. Country fans admires Dereck’s image and style, and they seem to be very interested about Dereck’s musical development. His newest single “Ellatheia” captured the interest of tens of thousands of fans; “Ellatheia” become popular, especially among romanian, Italian, russian and spanish people.