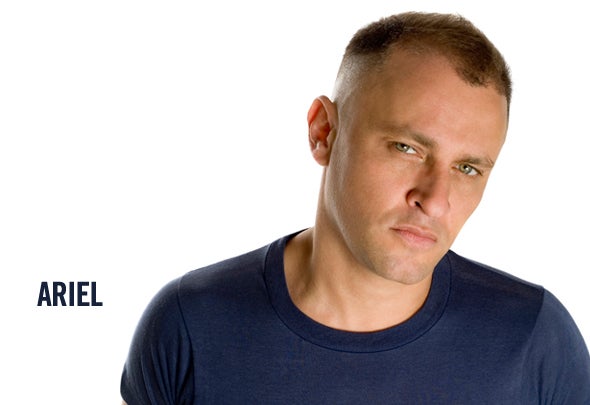 Argentinean born DJ and Producer Ariel Belloso must be one of South America's biggest music exports. He's played in more than 50 countries, sold over 2 million records and held a succession of 30 club residencies. Frequently rated by his peers as one of the most technically gifted DJs, Ariel's sound is a percussive groove, influenced by World and African rhythms, and the dynamics of Cuban roots. Ariel's digital label, MyDust, launched in 2007 and with more than 120 releases to date, has fast become one of the UK's hottest new labels. The youngest son of a nightclub owning family, Ariel grew up in Argentina's second city, Rosario. With a population of 2 million, Rosario's lively club scene is where Ariel began his DJ career at the tender age of 15. Before he reached 20 he was playing to thousands of people every week, and on one occasion, New Years Eve 1985, Ariel played a marathon 17 hour set at Dimension! By 1990 he began looking to Europe for a new challenge? Ariel landed on Ibiza in 1991 and soon scored his first European gig at Pacha. By the end of the summer Ariel had played nearly everywhere on the island, from Es Paradis to the recently opened Space terrace. As his reputation grew so did the bookings and, moving to London, he began his first UK residency at Crews in Covent Garden. Regular guest sets at Limelight, Club UK, Ministry Of Sound and Tribal Gathering, together with a busy touring schedule, saw Ariel become one of the pioneers of the early nineties UK Hard House and Trance scene. In 1996 Ariel decided to try something new; a weekly residency in London where he could DJ all night ? Freedom! Over the next 5 years Ariel's 8 hour sets at Bagley?s Studios in Kings Cross became the stuff of clubbing legend. With as many as 4,500 clubbers every Saturday, Freedom was the biggest party in London. Record label A&R's flocked to the club to check out how Ariel packed the dance floor, week after week. Many of the periods' crossover hits were broken in "Ariel's Dancehall" including one of his own productions, "A9". A chart success when released on Pete Tong's Essential Recordings, "A9" was the first UK Top 40 hit by an Argentinean artist. In addition, Ariel became known for his remix duties, his work on Darude?s ?Sandstorm? went on to become the world?s biggest selling 12? inch of the year 2000, while Ariel?s remake of Talking Heads ?Psycho Killer? is considered by many DJs and music journalists alike as one of the greatest vinyl bootlegs of all time. At the turn of the millennium, as he began his residency at London's state of the art new club, Fabric, Muzik magazine listed Ariel in their World Top 50 DJ's. Fabric is where Ariel perfected his distinctive Latin-Tech style. Playing more than 400 (and rising) DJ sets there has given him the unique opportunity to test his own productions on one of the world's best sound systems. At Fabric he regularly plays with a live percussionist, adding a further rhythmic dimension to his sound. Live percussion also featured at both of Ariel's own London clubs, Latinaires at Turnmills and his traditional World Jazz Latin night, Manteca at Freedom Bar, Soho. DJing has taken Ariel all over the world in the past two decades, playing some of the greatest venues and music festivals. He was one the first DJ's to tour the Middle East and Asia, in 1997 he headlined the first ever Pride event in Africa, and in the same year Ariel was invited to perform at Summer Stage in New York's Central Park. In 2004 and 2005 Ariel was honored to DJ at the Argentine Embassy in London. Returning regularly to Latin America, Ariel has been instrumental in promoting the European electronic sound in the southern hemisphere. In 1994, on one of the first DJ World Tours, Spain's TVE filmed him playing to 3,000 clubbers at Buenos Aires' legendary Bunker Club. He was the first international DJ to be broadcast on radio in Cuba, following his 2002 "Dia de la Revolucion" street party in Havana. Late 2009 Ariel released his album, "Camará". Although he has released a number of mixed compilations, "Camará" is Ariel's debut as an artist, and includes collaborations with some of Latin America's finest expat musicians. 2011 sees the release of Ariel?s new single ?D?ese?, in stores from March.