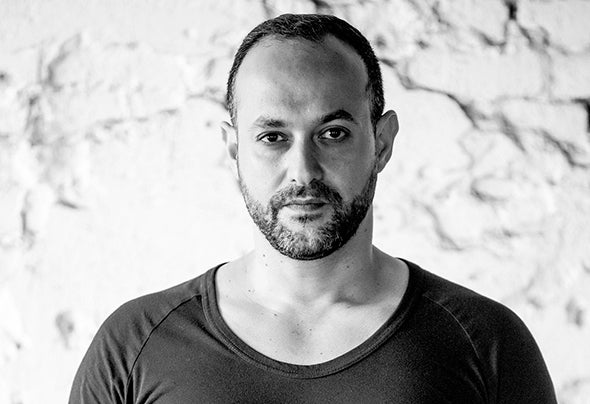 Coming from a Persian background, but living in Amsterdam since he was 12 years old. He grew up in the dynamic atmosphere of the capital of The Netherlands and was getting infected like a lot of people in the early 90’s with HOUSE MUSIC virus! His rst contact with House was during a high school party where he heard Morel's Grooves - Let's Groove, he saw the hypnotic beats and grooves putted a spell on the dance oor. From that moment he had a mission and wanted people to dance and lose themselves on the dance oor on hypnotic grooves. His love for vinyl was a fact and he was hooked for life!Collecting new records had become his daily activity, spending hours in record stores, crate digging for that one little jewel which would make his set outstanding and unexpected!His eagerness and turntable skills got noticed by promoters, which granted him the chance to play at the legendary club IT (Amsterdam). And not much later he started his own club night ‘House of Bounce’ at The Escape (Amsterdam). From that moment he has been playing at numerous clubs and festivals through out the Netherlands and abroad. Next step was creating his beats and grooves! He started to drop by in the studio to learn the tricks from fellow artists. In 2005 his rst vinyl release was a fact! He developed his own signature sound with combining tech house and tribal percussions. After a writer block in 2015, he lost what touched him in his music. He started to search for a new way in creating and nding the right energy for his tracks. He found it in techno! “Smash” was the result! Released in 2017 by Witty Tunes (#1 at Traxsource Techno Top 100). The joy and love is back which can be heard in his new productions and in his podcast Aquatone. Which can be heard at AWM.FM who offered him a weekly radio show end of 2018. Tune in for a musical ride with your host Farshad Kay and expect phat beats, melodic synths and hypnotic sounds, all driven by the same energy as he himself is!