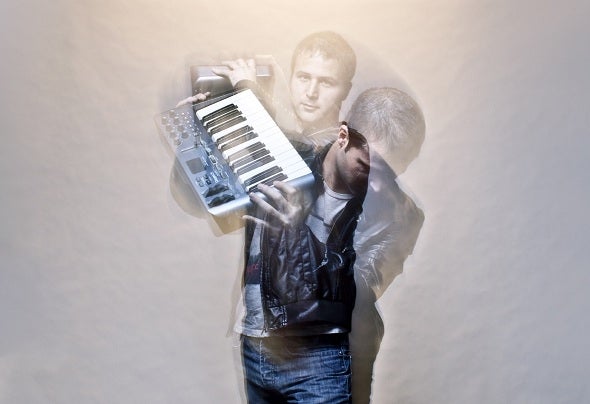 Nicolas Silvano aka Logiztik Sounds was born on December 16th, 1981, in Montevideo, Uruguay. Since an early age he showed a strong love for music, he spent his days listening to 80’s bands like Kratfwerk, Depeche Mode and Camouflage that had a great influence on him. At the age of 14 he started to get more and more involved in the DJ world as well as dancing Rap, Hip Hop and Break Dance. Nicolas’s great passion for music was notorious.After years of interest and research, by 2000 he got involved in rave parties and has been a key participant in the most relevant House and Techno music events ever since. This great influence is reflected until today in his sets and productions. In 2005, after spending some time under medical leave, he wrote his first track, which was quickly picked and played by Hernán Cattaneo, one of Nicolas favourite DJ’s. “Big Bang” also became is first vinyl release as well as the beginning of an international career as a DJ. Nicolas hypnotic and energetic sets are always the right balance of eclectic sounds and genres with the right flow of grooves that never turn boring. His impressive technical ability and great music selection is without doubt what makes his sets the perfect club experience where time warps and the listener is transported by the overwhelming atmosphere created. His sets have the ability to capture a wide variety of dance floors, from Asia to Europe and all across America. He has also been the representative for brands such as Reebok and Radisson De Capolis and performed in festivals and clubs in over 15 countries. He has played alongside everyone you can imagine; artists like Sasha, John Digweed, Steve Lawler, Nick Warren, Danny Howells, Dave Seaman, Jimmy Van M, Anthony Pappa, Funk D Void, D-Nox, Guy J, 16 Bit Lolitas, Beckers, Christian Smith, Chris Fortier, Kasey Taylor, Martin Garcia amongst others. Nicolas lives and breathes music, steering away from overplayed commercial music he is always researching and scouring for fresh underground tracks – the man never sleeps! This passion lead naturally to his latest venture, founding and managing Mak.Tub Music, an independent record label alongside his partner Arjun Vagale. The imprint already has an impressive roster of artists including Jimmy Van M, Alex Dolby, Paolo Mojo, Fiord, Jay Haze, Peter Horrevorts, Pawas, Dave Ellesmere, Ray Kajioka, and has hit the coveted Beatport charts. Being part of the music industry for over 7 years, his productions have been featured on labels like Global Undergound, Little Mountain, Vapour, Sprout and emFire, Sasha ́s prestigious label. As a key player in today's dance music world, his music cannot be pigeonholed in just one genre, this becomes evident with his collaborations and remixes involving artists such as Underworld, Sasha, Infusion, Paolo Mojo, Nick Muir, D-Nox & Beckers, Jeff Bennett, Dousk, Eelke Kleijn, Quivver, Anthony Pappa, Jimmy Van M, Antix/Fiord and many more. With a sound so versatile he has fans from DJs from all genres, like Tiesto, Paul Van Dyk, Sasha, Hernan Cattaneo, Dave Seaman, Nick Warren, James Zabiela, Jimmy Van M, Anthony Pappa, Pete Tong, Sander Kleinenberg, Quivver, 16 Bit Lolitas, Fergie, Umek, D- Nox, Beckers, and more. Nicolas has proven his place within the leading Producers, DJs & Label Owners from South America.