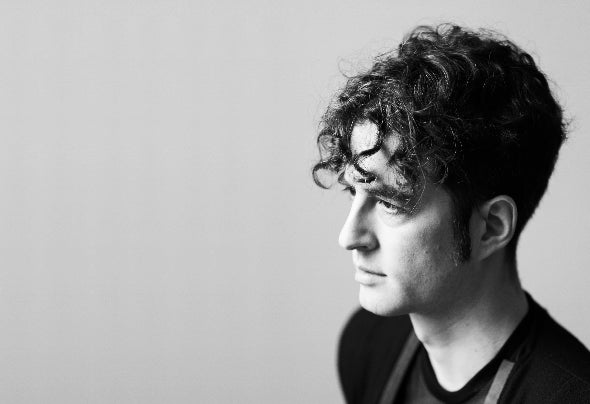 Nicolas Bougaïeff reframes familiar tropes for his own mind-expanding vision of body music. But peel back the layers of challenging textures, and there’s a hell of a lot more going on than first meets the ear. Having two decades of musical know-how and a classical background under his belt hasn’t done Bougaïeff much harm. He began learning the violin aged seven, studying at the Conservatoire de musique du Québec à Montréal, before playing tenor and baritone sax in marching bands as a teenager. There’s no saxophone hidden in his music now, but there’s plenty of applied knowledge borrowed from contemporary modern classical techniques. Bougaïeff’s intention is to sing to the tune of optimism and commitment rather than nihilism and destruction. His music draws on the theories of French philosopher Jacques Attali, who attributes a prophetic role to musical structures in shaping social and political structures. It also takes inspiration from the musical techniques first proposed by Henry Cowell and Charles Ives and Elliott Carter, the latter known primarily for pioneering temporal experiments. A decades-long love of club music has compelled Bougaïeff to challenge conventional wisdom, delivering genre-busting Berghain sets that expertly blend French-Canadian hip-hop with Tchaikovsky, moody techno and ambient. Launching his debut record as a producer in 2013, the Movements EP with Max Cooper, Bougaïeff has since put out a string of singles on labels including minimal techno imprint Trapez. He released his first EP on novamute in 2017, Cognitive Resonance. Outside of music, Bougaïeff co-founded software company Liine with Richie Hawtin and others in 2010 and in 2018 engineered the Lemur app used by astronaut Alexander Gerst on the International Space Station in a live jam with Kraftwerk. From his teaching - he founded the Berlin Academy of Electronic Music - to writing his PhD thesis on minimal techno, Bougaïeff goes the extra mile with every project.