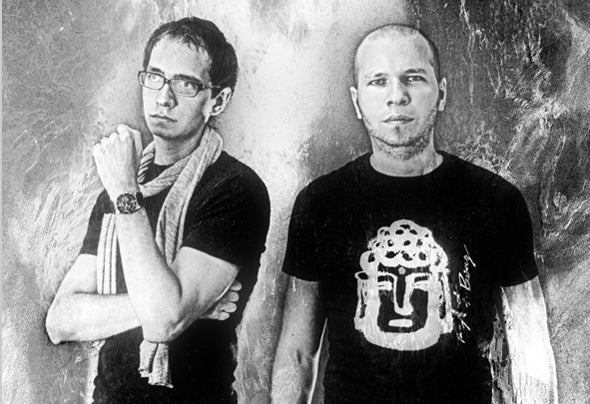 Mondstrahl is techno project of Moonbeam. Graceful and elegant. Exotic and muscular. These adjectives can be just as easily utilized to describe MOONBEAM’s unique style of electronic dance music (EDM) as they can be used to describe the artists, brothers PAVEL and VITALY KHVALEEV. Hailing from Russia and forging the amazingly successful MOONBEAM alias in 2003, the act has had an impressive run of more than 177 releases, including original productions, remixes and three full-length studio albums. Additionally, the video and graphics arm of MOONBEAM’s creative organization has produced as many as 18 commercial-grade music videos. THE SECRET is MOONBEAM’s third and latest full-length studio album, released in November of 2011. It’s no wonder that, for the third year in-a- row, MOONBEAM placed on the venerable DJ Magazine “Top 100 DJs” poll in 2011, quite an accomplishment considering the tens-of-thousands of DJs around the world vying for a slot. As children growing up in Russia, the brothers KHVALEEV were influenced early on by all genres of music. Today, their off-hours musical tastes veer far outside the realm of electronica, although they do admire the sounds of musical pioneers like ROYKSOPP, RADIOHEAD, MASSIVE ATTACK and BJORK. What binds these artists together and what attracts the KHVALEEV brothers to these acts is, as PAVEL KHVALEEV summed it up, “Music that has no limits, no borders. This inspires us to make experiments with our own music.” With a musical style described as existing somewhere in the netherworld between atmospheric trance and high-octane techno, MOONBEAM’s live shows are a multi-sensory treat. Playing together in the world’s top clubs and festivals since the duo’s inception in 2003, MOONBEAM have worked hard to establish and grow a dedicated fanbase amassed from all corners of Europe (in particular, France, Italy and The Netherlands), and Asia (Japan and India, in particular). With their first hardcore foray into the North American dance music scene in 2011, the duo is also preparing to take this continent by storm. Exhibiting their DIY, hands-on approach to all things creative, the KHVALEEV brothers established their own MOONBEAM DIGITAL imprint in 2005 for releasing not just their own music, but also that of fellow rising-star artists. Releases on MOONBEAM DIGITAL include: Moonbeam ft Avis Vox, “Hate Is The Killer” (Arty Remix); Avis Vox, “Doors Opened Inside” (Moonbeam Remix); Francesco Sambero, “Don’t Speak” (Moonbeam Remix); Moonbeam ft Blackfeel Wite, “Your Wind Is In My Hands” (Ramon Tapia Remix), and numerous others. Not content to contain their releases to their own label, MOONBEAM have also an enormous output of releases on respected labels, such as: Black Hole Recordings, Armada Music, Ultra Records, Songbird, Be Yourself Music, Coldharbour Red Records, Kickin’ Music, Spinnin’, Proton Music, High Contrast Nu Breed, and the esteemed German label, Traum Schallplatten, to name but a few. Of their nearly 200 releases, three of MOONBEAM’s more formidable undertakings were full-length studio albums: 2008’s Consumption (Soundz Recordings), 2010’s Around The World (Black Hole), and 2011’s The Secret (Moonbeam Digital). The Secret has alternately been described as sensual, ghostly, atmospheric or bold. What’s for certain, though, is that MOONBEAM’s music is cinematic. It’s this appreciation for the cinematic scope of their music – that which conjures up visions of unrequited love, longing and satisfaction, and the excitement of the chase, amongst other themes – that’s drawn the world’s best and brightest DJs/producers to support MOONBEAM’s music. Chief among them include: ARMIN VAN BUUREN, TIESTO, FERRY CORSTEN, AXWELL, MARCUS SCHULZ, MATT DAREY, PAUL VAN DYK, JUDGE JULES, JOHN DIGWEED and many others. As their astounding discography attests, MOONBEAM is not only one of the most prolific EDM artists to emerge from Russia this decade, but they are amongst the most sanguine.