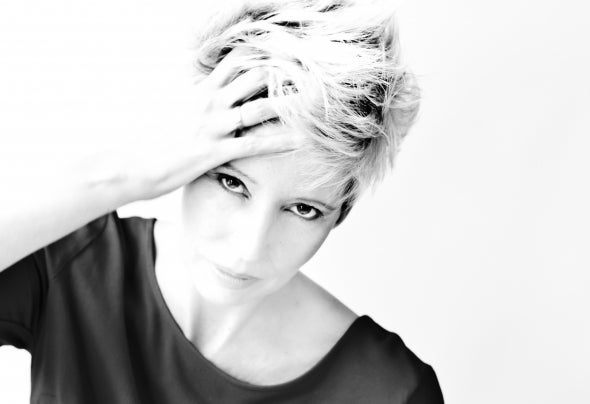 Estroe started DJ-ing in 1998 and is regarded as one of the few international female DJs who made it to the top. She has travelled to the USA, the Caribbeans, Russia, Canada, Japan and across Europe. Her list of venues and festivals is impressive: Berghain (Berlin), Watergate, (Berlin), Fuse (Brussel), Tresor (Berlin), Sub Club (Glasgow), Cocoon Club (Frankfurt), Rex Club (Paris), Origami Entertainment Club (Tokyo), Warehouse 702 (Tokyo), Harry Klein (Munchen), Q Club (Zurich),Awakenings (Amsterdam),Dave Clarke’White Noise (Amsterdam), Sonar (Barcelona), 5 Days Off (Amsterdam), Bergwacht (Cologne), DEMF (Detroit), Kristal Glam Club (Bucharest), Promise (Toronto), Club Ma22o (Amsterdam), Club 11 (Amsterdam), Studio 80 (Amsterdam), Doornroosje (NL), Solar Festival (NL), Welcome To The Future Festival (NL), Teqnology (HMH), In Qontrol (RAI), Off Corso (Rotterdam) Paradigm (Groningen), Pand48 (Groningen), Simplon (Groningen) and Dance Valley (NL)!Estroe was one of the residents at the Off the Record nights at Club Ma22o from 2002, where she worked closely with Steve Rachmad, Cellie and Carlijn. Many established DJs and producers were invited during her sets: Adam Beyer, Joel Mull and Anthony Rother, amongst others. Meanwhile, she was also involved in a new talent night called Set Off, and the experimental soiree Explicit Sounds which she organised together with Steffi, who is now resident DJ at Panorama Bar, BerlinHer career took off from there. Her style developed quickly and in more recent years, Estroe has been known for her warm, subtle mixes of techno and tech house that fluently evolve from delicate and warm music to darker sounds with energy and groove. She likes to set the tone at the beginning of an evening, and is also in her element when performing at peaktime and not scared of throwing in some old school techno and electro. Being a real people’s person, she is able to crank up the tunes and create a brilliant vibe on the dance floor.Many top producers started out as DJs. Estroe is one of them. Her delicate and profound productions are not about maximum compression, distorted hi-hats or full-on bass drums. Instead, they are about atmosphere and space.Estroe started producing several EPs and singles (on labels such as Lessismore, Little-D, and Muzikism) before releasing Driven on Connaisseur Recordings in 2007. This track sparked the interest of several big names. Ellen Allien chose Driven for her Fabric.34 mix CD. John Digweed was blown away by this minimalist masterpiece and promptly asked her for a remix on his Bedrock label.Estroe’s long-awaited debut LP Elemental Assets, featuring a guest appearance from Miss Kittin, followed in 2009 via Connaisseur Recordings and received widespread critical acclaim. Just recently this year, Estroe released her second album Comfort and Closure (EevoNext Recordings).With her sophisticated, warm and elegant productions Estroe hasn’t gone unnoticed among other DJs. Dave Clarke booked her for his White Noise parties and she’s a resident at his Dave Clarke Presents event (Melkweg, Amsterdam) twice a year. She is also a frequently asked remixer, as is evident from the number of times her remixes for Bedrock, Manual Music, Tulipa Recordings and Cinematique hit the charts.Having a desire to spot and promote other artists, she acts as one of the judges in the biggest Dutch production contest Vinylized and gives workshops at the Red Bull Music Academy. Furthermore, she has her own agency www.estroe-advice.com which provides technical and managerial training for aspiring producers and dj’s . Estroe also gives workshops on Ableton, and tries to provide a platform for new talents. She does this by broadcasting their mixes at her monthly Estroe Invites Proton show and by booking them at her Estroe Invites events.Estroe resides in Rotterdam. In September 2014, she will launch her new label Rosedale Records which will be yet another product of her ongoing success.