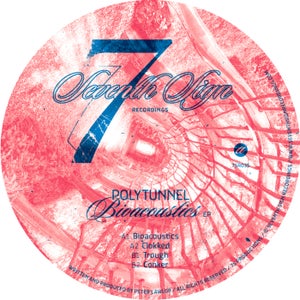 Talented Kilkenny-born and now Glasgow-based Peter Lawlor, aka Polytunnel, rocks up on Seventh Sign Recordings and turns in a masterly release.

Polytunnel is a meeting point of sounds and interests, not bound by genre or scene. Having cut his teeth as resident DJ at Dublin venue The Bernard Shaw, he eventually made the move to Glasgow in 2019, bringing him closer to the label he fittingly finds himself representing here. That same year he caught the attention of London-based party starters, Childsplay, where he released his debut 12, Time 2 Time.

His style of melodic electro mixed with breakbeat influenced acid has seen his music gain acclaim from the likes of Mixmag, DJ Mag, Inverted Audio, Xlr8r and the support of many notable DJs, including the late great Andrew Weatherall on his highly rated and much missed NTS show, Musics Not for Everyone.

A run through Peter Lawlors music to date, in particular on this record, invokes a strange uncertainty over whether this can truly be - aside from a track included on a release by the excellent Were Going Deep label - only his second proper EP release. His sound is as though honed across many records, culminating in this rich, clever, tasteful electronic music that finds its spiritual home on Glasgows premier underground label.

Take the opener Bioacoustics with its smart palette of wistful synths and sweeping pads, all driven by those beautifully produced ERP-reminiscent crisp drums and that commanding electro bass line. This certainly doesnt seem the work of a relative novice. Next up Clokked goes on a haunting, darker journey, conjuring up ethereal textures, underpinned by a foreboding low end, maintaining the thread of quality throughout. Over on the B, the gorgeous electro-tinged moods of Trough with its sparkling Kraftwerkesque melodies charm the listener before Conker takes a rhythmic left turn as a funky breakbeat is soon joined by an insistent acid bass line, before some dubby stabs and deeper synth lines bring deep atmospheric tones and this talented producers fine EP to a close.

Another very impressive moment for storied label Seventh Sign Recordings with a great addition to its artist roster and classic catalogue.