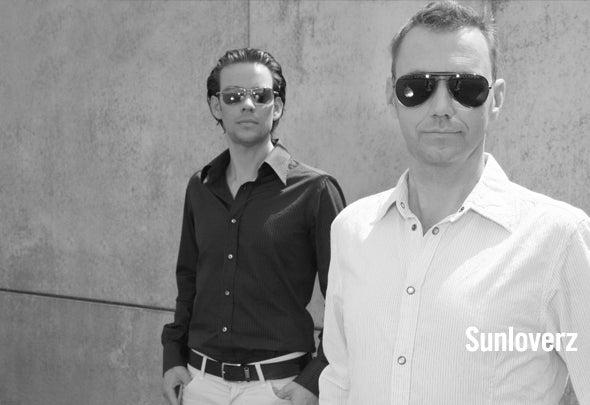 The foundation of the project „Sunloverz“, (consisting of Frank Sanders and Bernd Johnen) was at the same time the hour of birth of their own label „lickin´records“. After both already produced several tracks and remixes for labels all around the globe (like Rise / Italy, Superior / Germany, eastwest / Germany, Incentive / UK), the track „All around the world“ emerged in spring of 2004 as the very first and pretty successful publication on lickin´records. At the beginning of 2005 the second Sunloverz single `Shine On´ followed and became then a worldwide club hit. `Shine On´was a remake of the 80`s song `Shining Song´by Steve Winwood, who also gave the base fort he number one hit single `Call On Me´. In late autumn of 2005 this single was again released with new remixes of ‘Olav Basoski´, `Heiko & Maiko´and ran into the top 10 of all dance charts a second time. After a period of a lot of remix jobs for artists like MICHAEL GRAY, DR. KUCHO & GREGOR SALTO, HAJI & EMANUEL, RASMUS FABER or ORTEGA & GOLD in 2006 the third Sunloverz single `Survive´ was released in early summer of 2007. This track was a remake of the all time party classic `I will survive´ and emerged together with the English singer Nicole Tyler. Moreover the first official Mix-CD `SUNLOVERZ IN THE MIX´ was also released by lickin´records in 2007 – on this CD both present 13 fresh house tracks „in the mix“. Although been again very busy with remix jobs for the likes of ATB, SYLVER, ANN LEE or D.O.N.S. in early summer 2007 the two producers found the time to work on the next single ‘Show Me’ which was the result of a cooperation with the dutch Defected Records artist MISS BUNTY, who is especially known for her vocal part in IAN CAREYs hit `Say What You Want´. ‘Show Me’ was released in late autumn 2007 and reached TOP 10 positions in all relevant german dance charts. In summer 2008 there’ll be a re-release of “Show Me” on the Uk Label Hed Kandi. Now the guys return with their next big track “Summer Of Love”. The huge remix package includes Ian Carey and Ortega & Gold. The track gets big support by the usual suspects and entered the German Dance Charts as highest new entry already. Beside their own SUNLOVERZ project they are also responsible for the production of german chart act MICHAEL MIND (Kontor Records / Germany) who reached number 12 position of the german sales charts with his debut track ‘Blinded By The Light’ in 2007. Next to their jobs as producers and label managers, they are also on tour as DJs. Moscow, Paris, Amsterdam, Frankfurt, Berlin or Hamburg are just a few of their several international stations. It seems to be an incredible summer for Sunloverz. Definitely an artist to watch out for in the near future. Be updated on www.myspace.com/sunloverz