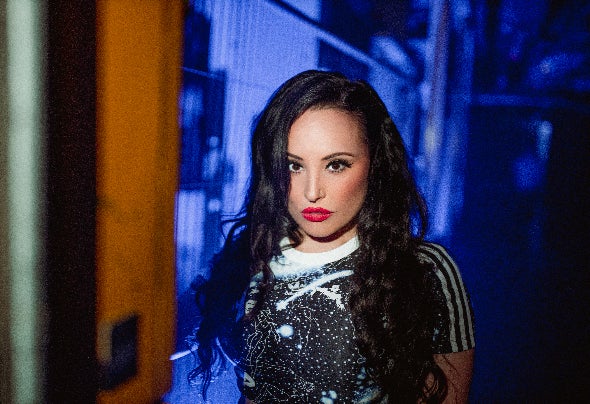 Since falling in love with dance music as a teenager, Charlotte Devaney has worked tirelessly over the last decade to become one of the most unique, multifaceted artists on the electronic underground. Yet with a string of viral and underground hits under her belt and a swathe of releases lined up for 2021, it feels like the best is still to come. Devaney’s journey towards the top tier of electronic music has been eventful, to say the least! Over the course of her career so far, she’s been a headline DJ, platinum-selling musical artist, radio host, record label owner, animal rights campaigner, video director, and even a Hollywood actress. It is undoubtedly for DJing that Devaney is best known. After first taking to the turntables, Devaney quickly rose to prominence as a popular host and DJ on Invincible Radio and later Pyro Radio (a station she still broadcasts on). She was initially obsessed with hardcore, jungle, and drum & bass, and was taught to DJ by some of Britain’s most iconic DJs, including Fabio and Randall. Devaney’s DJ career has flourished since she made her club debut in 2009, notching up headline sets all over the world, including such far-flung places as Barbados, Bali, India, Italy, Croatia, Qatar, China, Thailand & Turkey. Her success is due to her innate ability to read a crowd, work a dancefloor, and rock a party with an eclectic, bass-heavy mixture of music. As well as possessing tight technical skills and inspired track selection, Devaney is also renowned for delivering lively and passionate performances where she takes to the mic to host and spit rhymes. Naturally, these rhymes and sung vocals also provide a focal point for some of Devaney’s musical productions, which have appeared on a wide range of labels including Karma London Records, an imprint she founded in 2014. To date, Devaney has scored a string of underground club hits and collaborated with an impressive list of vocalists, MCs, and artists, including Rich The Kid, Riff Raff, Lil Debbie, Lady Leshurr, Bali Baby, Ms Banks, Fatman Scoop, The Ragga Twins, Tanya Lacey, MC Neat, and the legendary Snoop Dogg. Her cut with the latter, 2016’s “Flip It”, became a crossover smash worldwide, eventually being awarded Platinum status by ARIA. All Karma London releases are accompanied by videos produced and directed by Devaney, who famously appeared in hit 2008 movie How To Lose Friends and Alienate People alongside Simon Pegg and Megan Fox. In 2018, the passionate vegan created an online campaign for animal rights charity PETA based around her unique and distinctive track “Avocado” ft Rich The Kid. The video, which Devaney co-directed, has so far been watched and shared online tens of millions of times, becoming one of the viral hits of 2018. 2020/21 despite the global pandemic has been busy for Charlotte taking her creativity and energy online with her one-of-a-kind Hologram Sessions racking over 1M views and collaborating with some of the biggest names in Bass Music. Charlottes 2020/21 music has also seen various plays on national radio as well as firm support , playlist covers and additions across Spotify, Apple, Beatport and Amazon. Creative, driven, dedicated, and hugely talented, Charlotte Devaney’s ascendancy will continue in 2021. Whether through her DJ sets, productions, or performances, she’ll keep lighting up dancefloors in 2021 and beyond.