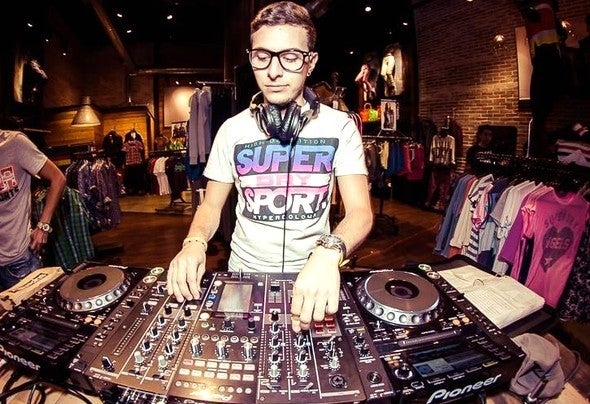 Andres Felipe Florez Martinez , better known as AFM Groove was born on June 21, 1991 in Medellin , Colombia . He currently works as a DJ, Producer, Remixer and also owns the Houstyle Records Label.His DJ career began in 2008 under the name Andres Florez . His focus was mainly on the genres House and Progressive House hand of his great colleague Briam Cifuentes . His first release was by pressing for the biggest label in Brazil , This Beat Records. For 3 years he worked to improve his technique and defining a style even on remixing achieving American DJ Sammy Peralta and pressing one of his last works for the South Records label, DJ Tom Sawyer.In 2011 , this young man is more inclined towards genre Tech House, tecnho and House, by which defined his own style and is displayed here when AFM Groove . In the year 2012 , began to be known worldwide with its original and remixes for world-class artists as Eddie Amador [ Citrusonic , KD Music ] Sergio Matina & Gabry Sangineto [ Tendenzia Records, Housesessions ] , Ray MD [The Warrior Recordings , Stealth Records ] Jeremy Bass & Branchie [Dirty Music ] OscaRomero [ Creative Sound Records ] among others, gaining recognition in many countries in Europe and Asia and America .AFM Groove has had the opportunity to locate in several Top 100 in stores like Beatport and Traxsource in the genre House and Tech House. Best location was # 44 with his remix for Eddie Amador - I Dont Trip ( AFM Groove Remix ) on Beatport ; # 34 in the Traxsource your track Bluee (Original Mix) both by Suka Records. Also I place it at # 50 with their single Luxuria for Drum Pressure . and to seal Abracadabra Recordings reached # 61 with his track Atmosphera . Now this young man is considered one of the new local and international artists with most recent times .Recently, on 10 May 2014, The Q Magazine, the national newspaper El Q'hubo, write a note about this young promise where it is recognized as one of the best new national talent and particularly emphasizes "At 22 years old and belongs to the union of the most recognizable DJ of our country. This profession is serious ... it's not for everyone."He has worked for major labels worldwide such as : Vamos Music, Patent Skillz, Recovery House , Play This Records, Suka Records, Ritmikal Records, Club Session , Patent Skillz, Abracadabra Recordings, among others. Houstyle Records label owner ; is a Digital independent label of Electronic music that was born in the city of Medellin , the November 20, 2010 , with a very clear idea : Promote Musica House and Tech House good quality , support and promote new talent, he Providing a significant contribution to Electronics national and international scene . It features artists such as Dany Cohiba , Ray MD, Kevin G, American DJ, Alfonso Llovera among others.Over the years, this young talent is constantly learning and continues to improve his technique, is currently focused on producing very underground Tech House with a unique twist dazzling an energetic bassline . He has had the opportunity to present their set on large Web sites such as , Mansion Club , Aula 69, Baren , Tropical Cocktails, Dubbai Lounge, Durden and many more , plus he had the opportunity to appear before the public in Andalucia, Valle del Cauca. His sessions characterized by the surround sounds and very glad exploiting all its energy, highlighting her curves and great style when it comes to the holidays. He has shared the stage with djs such as: Mariano Santos [ Arg ] , DJ Smilk [ Col ] , among other great local exponents.It has been supported by great artists like Roger Sanchez , Sergio Fernandez , Paul Van Dyk, Erick Morillo, Funky Junction, Martin Villeneuve, Sergio Matina , Kid Shakers, Gabry Sangineto , Skla , Ray MD , DJ Haro, Miky Falcone , JJ Mullor , Subcquence , Juanito , Tavo , Rio de la Dune, Eddie Amador, Igor Project, Monxa , Aldwin Macapagal , Kevin G among others.