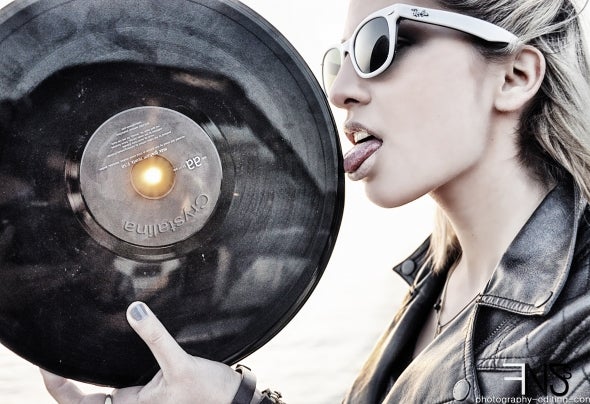 Who: CrystalinaWhat: A DJ / producer / musician with stacks of energy and a deep love for clubbing and electronic music.Style: Electronic house, tech house and techno. The Basics:Crystalina is a young, super energetic DJ. She plays house and techno to her enthusiastic audience in her native Greece. Now she is ready to break out onto the international club scene.Back story:Crystalina Dion grew up in Patras, Greece with her Greek father and American mother. She loved music as a child, studied piano and, eventually, did a DJ course to study the finer points of that discipline. At 17 she had a residency in her home town; a year later she was playing for 2000 people in a big club on the Greek island of Kos. In 2011 she made her debut in Ibiza with a set to a full capacity Bora Bora.Now she regularly plays the islands and big cities, as well as a handful of gigs across Europe. And she's started making music to play in her sets using a basic but effective set up - keyboard, computer running Ableton, and a Maschine Micro.What makes you special as a DJ? My energy, my taste and new ideas all the time and, at a time when so many DJs pay engineers to make their music, I stand out because I play piano, guitar and produce all my own stuff, and I'm only 22 years old.What current and legendary DJs to you most admire? Sasha, Carl Cox, Luciano, Erick Morillo, John Digweed.In a world of many DJs and producers how do you stand out from the crowd? I make my own records, I am always in a good mood when I DJ and I have so much energy that I want to share it with the people that listen to me.What's your ambition? Where would you like to go with your sound? I want to create my very own, unique sound and make very good records. Crystalina's top tunes of all time:Liquid Variety - The Best Part Of The Trip Unkle - In A State (Sasha Remix) Paul Oakenfold - Southern Sun Erick Morillo - Live Your LifeDefining moments of Crystalina's career so far:Playing summer gigs in the Greek islands, summer 2009, it was crazy, too many people, so much energy and music! When I did the warm up for Pete Gooding in the carnival festival in Patras, the biggest in Greece. When I first went to Ibiza and listened to Sasha, it was so inspirational.Things you would like to achieve in the next 5 yearsAs well as making my own music I would also like to start singing on my own tracks. I also want to be an international DJ, playing all over the world.