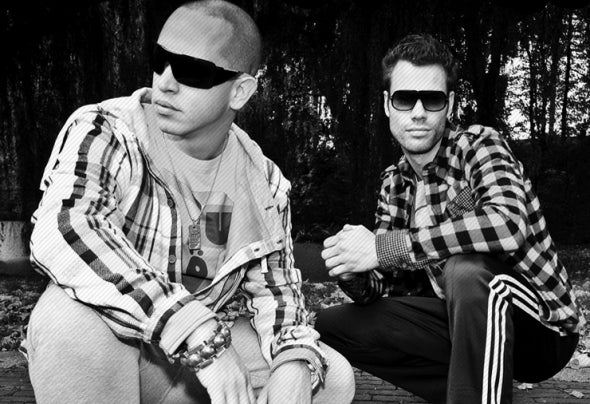 The RiddimJunkies, a duo consisting of Jamie & DennisJamie is originally from the seaside resort of Brighton in the UK. Jamie already had his first weekly residency at one of the local nightclubs at the age of 16. In 2005, after a short break from music, he started his musical career again with gigs in the Honey Club in Brighton UK, Zanta Beach on the Caribbean island of Curacao and a residency at Sympatique in the trendy beach club Papagayo in The Netherlands. In 2007 Jamie’s interest in music production began to grow. He wanted to learn how to make the music that he had been playing for so many years. Months were spent playing with different techniques and programs to create music. His enthusiasm grew even more and in 2010 he completed a course in Electronic Music Production at SAE in Rotterdam.Dennis has been Dj’ ing since the age of 17. As former resident Dj of St Tropez, he is also well known to Rotterdam, “The home of House music”. The Level, Time Out and the VIP Room have also been audience to his sounds. His love for quality house music could be heard in all his sets and this is the reason that he was playing so many venues at such a young age. Dennis was ready to take it to the next step, producing was the way to go and thus is the RiddimJunkies the perfect step towards his musical goals and a way to put his own little twist to his live performances.Dennis and Jamie met each other for the first time at a party they both played at. They got on well together and after continuing the contact via social media it didn’t take long before they got booked to play at a party. Thy were booked to play solo sets but boys being boys they decided to join forces and play a back to back set. The duo rocked the crowd and blew the roof off the venue. It was this moment that it happened for them, this was the moment that the “RiddimJunkies” was born, a name that sums these guys up, addicted to the beat! After the First successes the gents started to become restless, they wanted more! Playing sets together because they believe in what they do, that the public join the party and don’t want to leave.In 2011 they launched their monthly free podcast “Addicted to the Beat” which is receiving huge exposure and is loved by many.They also played their first festival gig as the RiddimJunkies, TRIX In the MIX at Den Bosch in The Netherlands. This is where their career took a big step forward. It was here that they became friends with the Tech house producer and Adapt recordings label boss Dj Jorgensen. The result is collaboration with Jorgensen himself and two releases on Adapt recordings.The RiddimJunkies are hitting the studio and coming up with great original material and have also been asked to remix some tracks for some great tech house producers.The future is starting to take shape for this duo, they are definitely one to watch out for!