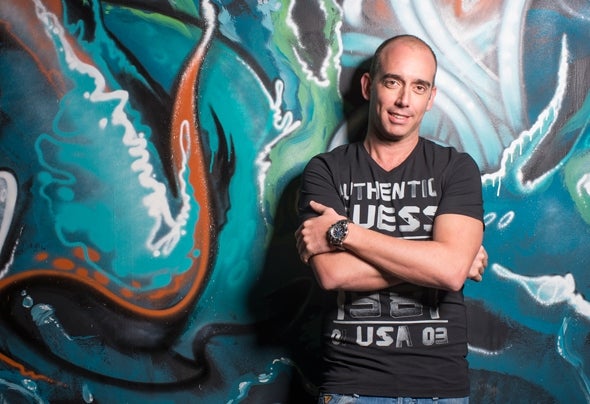 If there’s a Portuguese artist with the DNA of a superstar DJ, that is Pete T ha Z ouk. His innate ability to read a dance floor and his skills to deliver exactly what it wants are his most common and distinguishable traces.APete Tha Zouk performance is the epitome of joy and happiness. Hands in the air, bodies grooving to a sonic range that goes from vocal house to bassline house, whether it’s a hit or an underground track, Pete plays whatever is needed to make his audience happy. T his has made him number one DJ in Portugal and a fast rising star in Brazil, Switzerland and Angola. This has probably made a huge difference as he is, for the first time, on DJ Mag’s Top 100 DJ list on the 37th spot and representing a worldwide community of 240 million Portuguese speakers!Born and raised in Olhão, Algarve, land of seafood and summer holidays, Pete made his appearance in the scene with two residencies: in Mitto, a bar that made a difference in the southern way of enjoying the first nightly stop, and in the now mythical Locomia, a club overlooking the ocean inSanta Eulália’s Beach, that had literally every star from the DJ Olympus there playing during the summer. In Locomia’s dance floor Pete was able to see superstar DJs in action and learn from them.Soon after his DJ skills were widely known, the time Pete spent in the studio paid off as his first tracks, today part of the Portuguese tribal house classics, were underground hits and caught the eye of veteran DJs and producers in Portugal and abroad. “First Tribal Feeling” caught DJ Chus’s eye and soon after Pete Tha Zouk went to Madrid to master the track in Chus & Ceballos studio. “Kashmir” and “Enchantments” followed and Pete was a household name when it came to music production magic. In 2003 and together with DJ Vibe, Pete T ha Z ouk produced a tracktitled “Solid Textures” that would be released through the infamous Low Pressings label. This track topped the charts and won several awards bringing Pete Tha Zouk’s production skills even more to the spotlight. Meanwhile his DJ career blossomed as he started working as a freelance DJ and playing all over Portugal.By 2006 and facing an ever growing DJ career in homeland Portugal, Pete T ha Z ouk decides to join WDB Management. With guidance provided by WDB’s mentors, José Manso and João Miguel, Pete T ha Z ouk’s career grows even more and reaches a status of being the most sought after DJ in Portugal. Promoters and club owners know that booking Pete Tha Zouk means having a full house. How many DJs worldwide can guarantee this type of success? Also, WDB took his career one continent further and Pete Tha Zouk’s career crossed the ocean and grew in Brazil. He was voted as last summer’s Revelation DJ and has an ever-growing number of gigs in Brazil. The world is next.Pete Tha Zouk has won several awards: on 2002 Portuguese magazine, Dance Club, awarded him the “Breakthrough DJ” Dance Club Award. By 2004 he won two Dance Club awards as “Best Producer” and “Hit Single of the Year” (for “Solid Textures”). He won “Best Portuguese DJ” on 2005 and 2006 on Portugal Night’s Awards. He did it again in 2008 and 2009 and won Noite.pt Award for “Best Portuguese DJ”. Already this year, 2010, Pete won “Best Portuguese DJ” Award in Radio Nova Era Best of The Year’s Awards and on Noite.pt’s Awards.2010 starts with “I’m Back Again”, a collaboration with Mastercris and world famous Abigail Bailey, that topped the charts and is already a part of several compilations around the world. T he video clip was recorded on the beautiful island of Florianopolis by awarded Portuguese filmmaker, Leonel Vieira. By October Pete T ha Z ouk enters DJ Mag’s Top 100 in the 81st spot.2011 is the definite year for Pete Tha Zouk as in October 20th he’s announced as the 37th best world DJ according to DJ Mag’s Top100, the world’s most respected DJ ranking. Pete Tha Zouk has raised 44 places and now occupies the most important spot ever by a Portuguese DJ.2012 has begun with collaboration with British DJ and Singer Rae on “Learn To Love – L2♥” on a vocal house tune and with a groundbreaking video clip directed by the Portuguese awarded filmmaker, Leonel Vieira, and filmed on location in Hollywood/Los Angeles.And for the third time in a row Pete has won the Best Portuguese DJ Award in the prestigious Melhores do Ano awards by Radio Nova Era. 2012 ́s Summer brought an amazing performance at Portugal’s most well-known summer festival – SWTMN – whose stage and huge crowd were the perfect set for Pete T ha Z ouk’s new videoclip – “We Are Tomorrow” – a collaboration of the Portuguese superstar with young talent Deepblue featuring the beautiful vocal of American singer Yasmeen. On July 1st Pete’s collaboration with British singer Kellie Allen on “Been Too long” is released. By September its “Rocksteady” that hits the stores; by October his worldwide release “Infinity World”, a mixed compilation featuring some of Pete Tha Zouk’s best tracks is released with great success. By December we’ll have “Hanging Out” and for 2014 the super soulful and brave “Don’t You Stop Me Now” and “Intensa” a collaboration with France’s next superstar, Quentin Mosimann, both released by French label DJ Center Records.Pete Tha Zouk has been the most wanted Portuguese DJ for the last six years in Portugal and a rising star worldwide, reason why he has created a wide spread legion of fans around him and, on Facebook alone, fans are over 385.000 and rising fast. Pete Tha Zouk is also the first Portuguese DJ to have a tailor made APP available for iPhone and Android: www.appmachine.com/apps/pete-tha-zouk/ and a VEVO channel