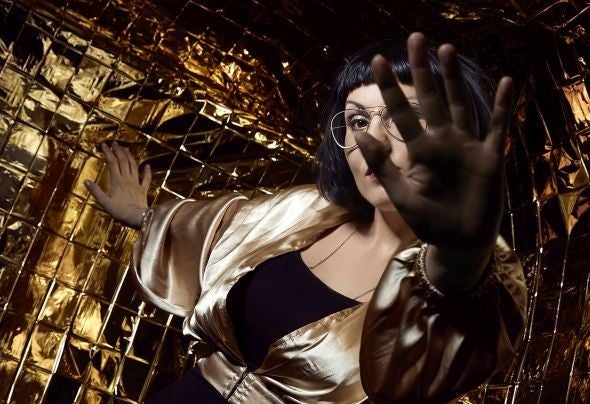 MARIA Die RUHE ..is energetic electronic sound that combines live performance with a unique voice. Maria´s stylistically open minded sets are made with deep passion, while she redefines live music through her creation of a new world, a new genre. She crosses boundaries of subculture and bridges the gap between parties and concerts. Playing with several controllers on stage, she deconstructs tracks playfully and spontaneously. Her wide range of sounds and emotions are weaved through lyrics, creating poetic loops and improvisations. Rich vocals in English and German alternate between natural and processed, lyrical and instrumental. While simultaneously being electronic and handmade, her music overtakes boredom and creates a space where everybody is invited to be as equal, wild, and free as we are often not allowed to be in our daily lives. Maria's vision is diversity. Her drive is finding new connections between waveforms, forms of art, and human beings. During the last years she played all over Germany, as well as abroad in the Netherlands, Norway, Poland, Switzerland and Turkey. A native of Eisenberg in Thuringia, Germany, Maria was drawn to music throughout her entire life. Already as a child, she invented a radio, play-like show in which she combined her favorite music with her own songs, speaking and singing all the different voices. As a teenager, she played in punk and pop bands and began to discover hiphop. When she moved to Berlin to study acting during the Noughties, the dance floors of the capital became her home. There her love for electronic music emerged. She decided to challenge herself and dive deep into the creation of music, studying jazz voice at the university of music in Saarbrücken. Maria formed with various band projects from improvised to actual music. At the end of her studies she moved to San Francisco to research the creative process and songwriting for her finals. During that time she finally got in contact with electronic music production. She first combined soundscapes with her voice and other instruments, adding different art forms such as dance and video art. Since then it seemed only natural to combine her favorite things: electronic music with her voice. Today she knows that to make good music, no matter how unusual the path, you must first listen to yourself. Despite a few detours, she has landed exactly where she needs to be – conducting the dancefloor. Currently living in Leipzig, MARIA Die RUHE is definitely one of the most interesting Acts / Artists these days. Releases such as "Nomad" (Kybele Records), "Romeo & Jane" with Mikah (Lost Diaries) speak for themselves. Her most recent EPs include "On the Beat" (O * RS) and "Patience", a collaboration with Seth Schwarz. More is about to be released in the near future.