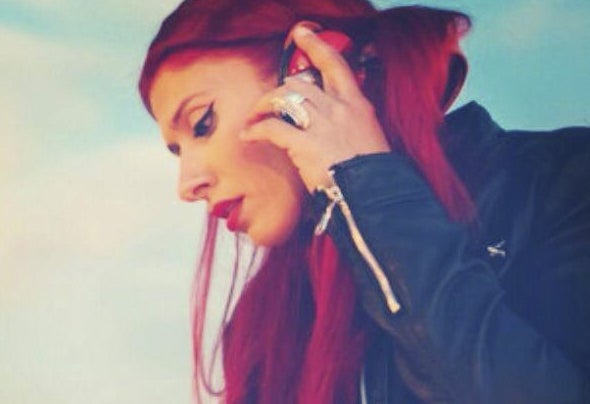 Liz Mugler was an actress, television presenter and model for a couple of years (one of the girls in "Man" also!), with her Venezuelan bloodline discovered her calling in life through music; a way to express her feelings. Not only that, She found she could take her music to an audience, to a crowd, conveying those feelings to them, sharing them, making them accomplices...so the those feelings became one.She never imagined for a moment that this new vocation would attain such success, So much travel... She has been in demand around the world since her start, in the summers of 2009 and 2010, she became the resident Deejay at Cafè Olé in Space Ibiza, and the guest star on the opening nights of Space Ibiza,Amassive achievement for a newcomer!...earning her a nomination for Best DeeJay of the Year from the hugely prestigious publication DeeJay Magazine 2009 and in consecutive years she achieved the award from Espiral Fm.Determined Beautiful and tough yet full of enterprise, she ventured into the world of art production(this is art, make no mistake), her first project being the successful "Café Olé is your Dreams", which is included on various compilations and released by House Works.Her first Bootleg, the sensational "La Mezcla Mágica"(the Magical Mix), influenced by the theme '"y'", which then led her to Roger Sanchez placing her tunes on the recommended playlist of his popular radio show "Release Yourself". It was the start of Roger's support for her and her Label Feelthe8, where he currently follows her up on her productions, for example the ambitious and brilliant "Desert Sun", When that came out she played a 40 minute set on Roger's radio show. Wow! Later to her surprise she was also made then resident dj (one of her many, many commitments to this day) at the infamous and bangin' Club Pacha Marrakesh...Well, everything in her life revolves around "the Music". She's currently directing and presenting her own radio show called "Made in Spain", and it's one of the shows that's been a hit on the top 100 i-tunes podcasts and is broadcast on a variety of Radio Stations worldwide Music is her life and may it continue to move the world...   She’s on the move, and in only one direction!!