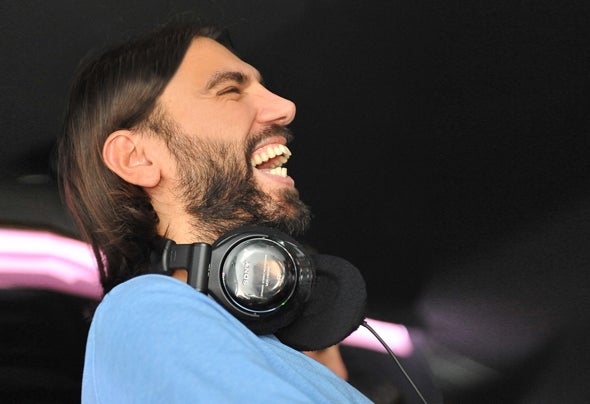 Since his early childhood in Frankfurt, LPs and singles were his favorite toys. His family's interest in music has played a great role on the growth of his love for music. In 1985, his family decided to move to Istanbul and Tarkan had continued playing his vinyls and recording tapes after he was coming back home from his school. His professional music career started after finishing university, when he became a resident at Power FM. Right after showing up in the music scene as a radio dj, he started to perform at the biggest clubs in Istanbul. Running fast in his music career, he had to give a short break to complete his military service between April-November 1997. Upon his return to Istanbul, he took scene at “Radio 2019” as a DJ and Production Manager while he was performing at different clubs in Istanbul. After the radio station was sold to a TV channel and changed its genre, DJ Tarkan continued playing his radio sets at FG till May 2007. His reputation in Turkey was spreading and the number of people appreciating his sound increasing with every event. The big break came in 2002 with the DJ of the Year award. Tarkan was sponsored to play his eclectic house sets, which he sharply forms depending on the time, the venue and the crowd, all around the country. His unique mixing style cemented his fan-base around the country, where he is frequently invited to play gigs in different cities. His creativity and talent was appreciated by the crowds and he was named number one DJ in Turkey for 3 consecutive years. Based on this success, DJ Tarkan decided to spend more time on productions, releasing tracks based on years of musical experience. His productions and remixes were included in the tracklists and charts of the world's well known dj's like Tiesto, Paul Oakenfold, Armin van Buuren, Sasha, Hernan Cattaneo, Nick Warren, Deep Dish, Sander Kleinenberg, Anthony Pappa, Dave Seaman, Danny Howells, Steve Lawler, Seb Fontaine, Lee Burridge, Desyn Masiello and many more. The momentum continued with bookings from different countries all over the world and in 2006, DJ Tarkan was voted Number 78 in the world by DJ Magazine's most important poll in dance music. While doing collaborative productions, Tarkan became close friends with V-SAG from Greece. Both went on tours together and the Turkish-Greek friendship resulted in the No Smoking Recordings label, which is intended to only release the highest standard of deep, tribal and progressive house music. DJ Tarkan and V-Sag have initiated a campaign for the understanding of the music "as is", giving people the opportunity to discover the true meaning of music in its purest form instead of "chemically enhanced fun".