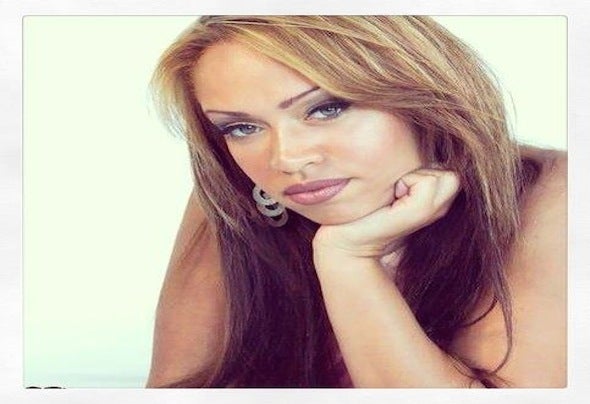 Introducing, MISS SOPHIA MAY, a beautiful, singer/songwriter, who with UK producer Bellatrax hit the #1 spot in the US Billboard Hot Dance Airplay Chart for three weeks in a row with “I CAN’T HELP MYSELF” (Nervous Records) and was voted #2 Dance Airplay Song of 2008 in Billboard taking the lead over artists such as Cascada, Natasha Beddingfield, Mary J Blige and Madonna featuring Justin Timberlake. It was #1 on Hot 96 Charts in the U.S. SOPHIA started her professional career at 16 and opened for some of the UK’s best such as Bristol based group Offside (Warner), Colourstone, and Kosheen.Spring 2009, her second single “ANOTHER DAY” (Nervous Records) reached the top five on Billboard and was on all radio playlists around the country and stayed on the Charts for 17 weeks and was voted the #20 Best Dance Airplay Song of the Decade in Billboard Magazine for 2009.SOPHIA has appeared at various Clubs in the United States and UK. She has done shows along side Lady GaGa, Michelle Williams and Cindy Lauper. Most recently she performed with Mr. Hudson at a gala in London.SOPHIA is in great demand as a singer, songwriter and has been asked to collaborate on numerous projects with many young producers and artists. Including writing and recording with the legendary Gloria Gaynor (“I Will Survive”). Her talent, passion and creative energy continually finds her working on new joints with some of the most popular producers around like Sunfreakz, Raz Nitzan, David Bernardi, Bellatrax and others.When not performing or writing music, SOPHIA, spends her time being a mom to her young daughter, working with youth at risk, and loves playing sports in her hometown of Bristol, England.Alittle known fact is that this statuesque beauty was a correctional officer which is where she saw first- hand that a good role model could change their lives in a positive direction. SOPHIA visits schools whenever possible to offer words of encouragement and empowerment.In light of the recent disasters around the world SOPHIA has offered her performances for fundraising organizations. “COME BACK” (Nervous Records) with mixes by Frankie Knuckles, Eric Kupfer and Digital Dog came dropped in November, 2009 and the song charted at #6.“I WILL NEVER GIVE YOU UP” (NP Records) Obsessive featuring SOPHIA MAY is playing all over the country including Europe and Asia.“TAKE ME THERE”, (dub step) released this year 2011 in the UK to favorable response with radio airplay and from her fans and can now be found nationwide.View SOPHIA’S moving song and video “BELIEVE” which she co-wrote and performs with Wu-Tang Artist/Producer, Moe Roc and Produced by Parris Pierce and Ninth Letta. Their inspiration was to motivate youth to stay in school. The Video shot by director Joseph H. Bernard was filmed on location in New York City and Bristol, EN and is a popular request from teacher’s and has been played in elementary and middle school assemblies. Whenever possible SOPHIA and Moe will perform the song live for the student’s. SOPHIA was approached by the International Reggae Artist, GYPTIAN and together they wrote and released “NAH COME OUT” check it out online.Last summer (2011) while touring the States SOPHIA also found time to collaborate with hip hop Artist, DJUKES from Brooklyn, NY, the album can now be downloaded and purchased on line . Check out the first two singles “I Be On some other Sh–!” and “Break it Down.” Again, showcasing SOPHIA’S versatility. DJUKES travelled back to the UK with SOPHIA to do some shows and shoot a video which is coming soon.Sophia is now working on projects with G-Unit who’s Label owner is 50Cent, she has been writing songs for Lea, their new artist. Sophia Also has has two new dance singles of her own coming out this summer. One of them through Tazmania Records.