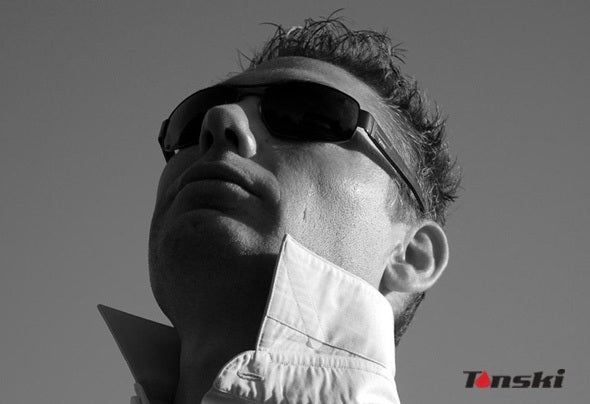 DJ Tonski aka Dieter Matton was only 15 when he started to spin dance music with a pair of second hand decks. His passion for electronic music was fueled by artists like Jean-Michel Jarre, Vangelis, Kraftwerk, Moby, BBE, Faithless, Green Velvet, Depeche Mode as well as local trance and house DJ’s. He quickly perfected the art of mixing and began to play at the local clubs in his hometown, often having to spin chart and top 40 music. It wasn’t always the music he loved but as he gained experience behind the decks the residencies helped him to assemble an eviable collection of classic dance vinyl.Gaining a solid reputation as a club DJ led Dieter to an opportunity to play at the ”Porsche” nightclub in Ingelmunster where he met top Belgian DJ’s dj Yves and his brother dj MD. Both were already active in the house scene and had just released a record on the famous Bonzaï Records label under the name "D-vibes". They helped the young DJ Tonski to refine his mixing style for a more sophisticated sound. When MD scored a gold record in Belgium with his track “Rio” (Porshe Records) Tonski had the chance to accompany him to major parties and events where MD would spin. It was a valuable education for a young DJ and Tonski also began to develop his studio production skills as well with the help of Aldo Verbeek, an acclaimed professional sound engineer and producer.Tonski was then offered the chance to prove himself as a resident DJ at Star Events Parties for Belgian Television. During this period he also released his first record as a producer under the monika “Steve Shadow” which was released on Zenith Records and began to work the warm up slot for his long time mentor MD at the “Q-Pit” club. Shortly afterwards he became the main resident DJ at another nightclub and it seemed the time had come for Tonski to take center stage...Read more on www.tonskimusic.com