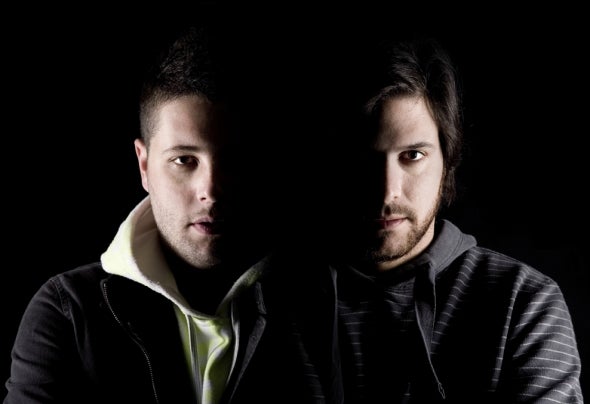 Even inserted in scenario that welcomes oddities and has in diversity one of its main strongholds, a name like Talking Props may sound quite peculiar. And so it should, because a moniker is never just a word, but a concept that must express the purpose of a project, especially an artistic one, and mainly one so unique. Diego Moura and Diogo Accioly 's props indeed talk an ancient dialect: the one that speaks straight to the mind and hips, taking advantage of that rhythmic syntax and melodic grammar that has kept Brasil on the musical map of the globe for more than five decades. Updating it to the brave new world of an electronic language that acknowledges no barriers or frontiers. Both have cut their teeth at the world's finest dancefloors, renowned places like Panorama Bar, Tresor and D-Edge, as well as shared the controls with reputed names like Matthias Kaden. John Tejada, Luciano and Cassy. But as much as this is an essential part of their experience, it is at their studio partnership, where they cross references and let their creativity flow that they show what their true intentions are. Having such diverse backgrounds - a musician from the northeast and a DJ from the southeast of this diverse country - they encountered in this project a common ground where they could synthesize their approaches into one solid proposal, which is to make people move. That noble purpose that stems from the very origins of Dance Music. The duo has undeniably been raising eyebrows and awareness throughout the past years with a simple yet effective package: simple ideas conveyed in the form of a irresistible groove, creating that relentless thrust that moves crowds as well as speakers in waves of force and delight. And the proof that their effort to reinforce the Brazilian presence in this increasingly vast and varied scenario has worked is the instant recognition of such stalwarts as Phonique, Vincenzo, Nick Curly, 2000 And One, Martinez, or even labels like Suara, murmur, Ladies & Gentlemen and Dessous. All eager to include their talent in their flightcases and among the ranks of their respective imprints. But this proves little when it comes to quality music and the kind of task these two are trying to undertake here is to have a longlasting effect on the scene. So, this is not just about now, because their time has already arrived, but also about the future, and this one belongs to tracks like "I Can't", "Just A Wah Party", "Catraio", and the work with the house master Vincenzo - "Seduction". Each an attempt to bring you a straightforward account of what this huge and lively corner of the world.