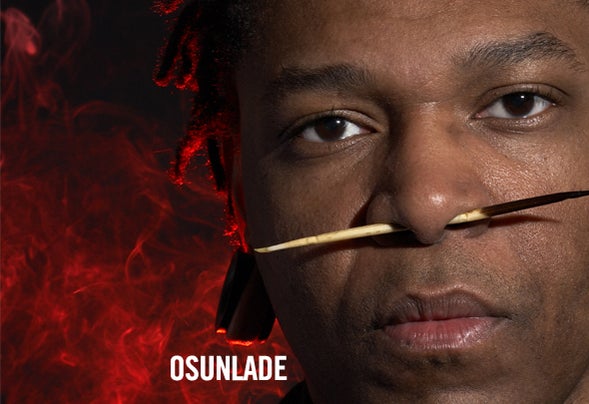 Osunlade is an artist who personifies art. His music as well as his being creates unified melodies manifested with balance, life and wisdom. Hailing from St. Louis Missouri, a place known for pioneering jazz, blues as well, innovative artists like Miles Davis. At age seven Osunlade discovered the piano and like a dove from the sky the vision of his lifes destiny was born. By the age twelve he found an interest in creating and producing songs of his own, he formed a local band, taught himself several other intruments and studied further the development of his unique sound. Not only did he manage to play the drums, bass and guitar, he realized his voice. Soon it would be clear his personal testimony and the beginning of his musical career. His professional journey began in 1987, at age seventeen during a visit to Hollywood. He quickly caught the ear of choreagrapher/performer Toni “Mickey” Basil. Offering him a role in the development of musical pieces for several projects including his first movie score for b-movie “Rockula” and the childrens television series Sesame Street. With her encouragement he qucikly moved to Los Angeles and began what would become a long history of music production. A few years later he would produce the very first album for the then independent Interscope Records. The artist was Gerardo, a long time friend and aspiring actor/dancer. “Rico Suave” one of the very first latin pop songs and novelty catch phrases to date was born. Now with a multiplatinum album and four gold singles to his name, it wasnt long before he was afforded many opportunites to master his craft. Within the next ten years and over twenty albums credited, Osunlade felt the pressures and practices of the music business overshadowed his passion of music. Deciding he would no longer work under the infuences of corporate ideals and demands, he chose to quiet himself, find spiritual solice and honor his soul. This led him to Ifa, a naturalist ancestral culture based on divination, deriving from the yoruba tribes of Africa and practiced by the slaves during the diaspora to America. In 1999, Osunlade would inbark on what is now his dream come true. The founding of Yoruba Records. Recognized as one of the most important dance music labels worldwide, Yoruba Records is purely a source of music created to elevate the spriit. With less than a year and two singles, he would receive praises from his peers and found the love he sought for years within the underground dance music community. As the success of the label grew, so did the demand for Osunlade to expand. In 2001 he released his debut album on the respected Soul Jazz Records label. “Paradigm” quickl;y became on of the biggest house albums that year and dubbed him the messiah of ancestral house music. With the support of dj’s worldwide and his music now introduced to a wider spectrum of listeners, this veteran musician/composer/producer becoming the artist finally acheived balance within. A year later, Osunlade moved to the island of Puerto Rico and relocated label operations to london. While he still produces and remixes for other labels and artists, his passion is in Yoruba Records maintaining its reputation of its unparalled quality in the music business. With its own family of talented producers and artists developing and bridging sound, the labels’ evolution is endless and bright. As he embarks on what has been his personal aspiration to date, Osunlade has evolved and is currently sharing his vision alongside a new band. With a new album project in the works, fans will finally hear the voice of the man and feel the honesty and conviction of his spirit.