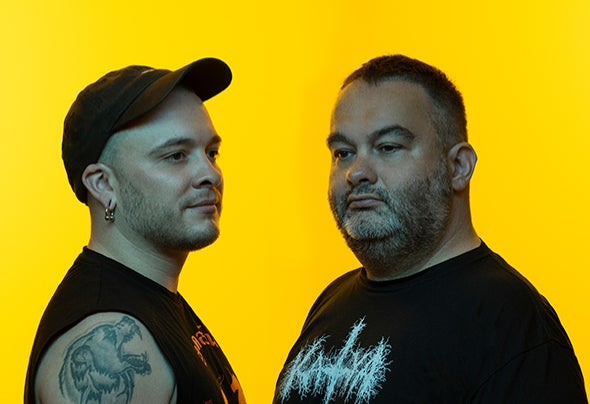 CYRK is a studio and live performance duo founded on a deep-rooted chemistry and love for rave music in all its forms. The path that led to CYRK was such a natural series of events that it was bound to succeed. The two members, who had separately been releasing music for years prior, were booked to play the same parties in Berlin and Moscow. They continued to rehearse together and perform live, then formed the duo (and shortly-lived label) CYRK in 2016. They still push the project into new territories with each release. Sammy is “the keys guy”. He brings the raw energy of his days playing in Belgium’s 90s rave scene to the project. Pascal mans the sequencers, mixdowns and the modular system. His sound is rooted in industrial techno, old school electro and breaks. They struck on a creative symbiosis, onstage and in the studio, as well as agreeing on fundamental principles of patience, independence and a grassroots attitude. Their music as CYRK is a Detroit-influenced and live-jammed blend of house, italo, techno, acid and electro. They craft tough, heavy-duty grooves and buzzing basslines from their extensive hardware set up, leading to releases on esteemed labels like Lone Romantic, Rawax, Burial Soil, Vakant, Science Cult, Dred or Avoidant. Their own label, Time Zero, gives CYRK full creative control, housing the purest incarnations of their vision. A live set or studio session from these two hardware obsessives is something to behold, a sea of wires and flashing lights conducting the CYRK current, from man to machine and back again. An endless spirit of experimentation runs through their set, based on principles of harmony and angled at a powerful dance floor experience. Their DJ sets, too, channel the CYRK vibe through different means, drawing on the history of electronic music and creating something of the now.