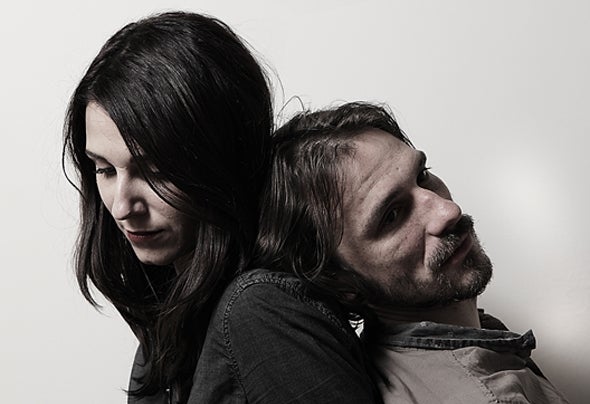 "Somehow a love story always makes its way through the unknown. Two people who learn to know each other, being aware of what they give up and yet ignoring what the future holds, throwing themselves into an endless see of question marks, stepping on stones of discord only to find their cloud of harmony. As the first notes of our music were born, we started our journey into the unknown, ignoring that we would one day go out there and share our two-seat-cloud with the rest of the world.” (Saschienne)Sascha Funke, one of Germany‘s greatest Techno auteurs and the genius behind bestselling records like Bravo or Mango, has some pretty big news. And it‘s not about some one off band project, but a partnership meant to stay. As Saschienne, Sascha has formed a duo extraordinaire with multi-talented instrumentalist, singer and wife Julienne Dessagne, displaying an expressivity previously unknown to anyone following his solo work. That said, Sascha is no stranger to expressive depths, with his earliest tracks already oscillating between plucked introspection and purposeful anthems. His 1999 career debut single Campus was released on Kompakt at number 13 in the label‘s catalogue, in this case bringing only good luck to the then rookie producer, since he went on to produce one masterpiece after another. Now, Sascha Funke returns to his very first label: “Besides from probably being the only supporter of Cologne's football team in all of Berlin, Sascha has been a lovely friend, great party wing man, DJ, producer and remixer since the very early days of Kompakt“, label head Michael Mayer is keen to point out, „We couldn't be happier announcing that Sascha joins our forces again, both solo and with his new romantic techno outfit Saschienne”.After 13 years as a Techno producer, Sascha has, thanks to Julienne, rediscovered the joy of the early days in the studio. „She opened a new door I never saw before and behind which I found excitement and freedom, allowing myself to go into different directions I never explored so far.“ Both artists describe not only a mere change in studio ergonomics, but the force of love ripping apart old constructs: „Being a band member is something new and interesting“, says Sascha, „Sharing the ups and downs of the creative process with Julienne emphasized all the emotions that come with it“. As a trained piano player and former semi-professional contemporary dancer, Julienne was exposed to classical and contemporary music early on in her life. Praising the intricate work of composers like Philip Glass or Louis Sclavis, it shouldn‘t come as a surprise that she fell in love with the challenging, unpredictable club sound from Optimo‘s JD Twitch &JG Wilkes, her first real club experience in the UK. She then went on to work for prestigious Soma Records and London‘s legendary Fabric Club. All those are influences tightly woven into the sound of Saschienne: „It was was born out of spontaneity,“, the artists declare, „no order, no rules. A chaos coming out of the explosion of a meteoric love. It took us quite a lot of time and reflection to give it a shape that others could see and hopefully appreciate.“ And what a great shape they found: far away from the romantic hokum of crude feelgood songwriting, they not only focus on on the harmony and bliss, but explore the discord, the misunderstandings that great love brings with it.